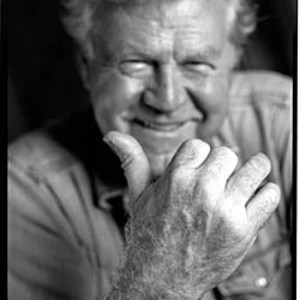 Billy Joe Shaver is an American country music singer/songwriter. He was born August 16, 1939 in Corsicana, Texas. Shaver's 1973 album Old Five and Dimers Like Me is a classic in the outlaw country genre. Shaver was raised by his mother, Victory Watson Shaver, after his father Virgil left the family before he was born. Until he was 12, he spent a great deal of time with his grandmother in Waco, Texas so that his mother could work. He sometimes accompanied his mother to her job at a local nightclub, where he began to be exposed to country music.[1]

Shaver was raised by his mother, Victory Watson Shaver, after his father Virgil left the family before he was born. Until he was 12, he spent a great deal of time with his grandmother in Waco, Texas so that his mother could work. He sometimes accompanied his mother to her job at a local nightclub, where he began to be exposed to country music.[1]

Shaver's mother remarried about the time that his grandmother died, so he and his older sister Patricia moved in with their mother and new stepfather. Shaver left school after the eighth grade to help his uncles pick cotton, but occasionally returned to school to play sports.[2]

Shaver joined the U.S. Navy on his seventeenth birthday. Upon his discharge, he worked a series of dead-end jobs, including trying to be a rodeo cowboy. About this time, Shaver met and married Brenda Joyce Tindell. They had one son, John Edwin, known as Eddy, who was born in 1962. The two divorced and remarried several times.[3]

Shaver took a job at a lumber mill to make ends meet. One day his right hand (his dominant hand) became caught in the machinery, and he lost the better part of two fingers and contracted a serious infection. He eventually recovered, and taught himself to play the guitar without those missing fingers.[4]

Shaver decided that life was too short to do something he didn't enjoy, so he set out one day to hitchhike to L.A.. He couldn't get a ride west, and ended up accompanying a man who dropped him off just outside of Memphis, Tennessee. The next ride brought him to Nashville, where he found a job as a songwriter for $50/week.[5] His work came to the attention of Waylon Jennings, who filled most of his album Honky Tonk Heroes with Shaver's songs. Other artists, including Elvis Presley and Kris Kristofferson, began to record Shaver's music. This led to his own record deal.

Unfortunately for Shaver, the first few recording companies he signed with soon folded.[6] He was never able to gain widespread recognition as a singer, although he never stopped recording his own music.

After losing his wife, Brenda, and his mother to cancer in 1999, Shaver lost his son and longtime guitarist Eddy, who died at age 38 of a heroin overdose on December 31, 2000. Shaver nearly died himself the following year when he had a heart attack on stage during an Independence Day show at Gruene Hall in New Braunfels, Texas. After successful heart surgery, Billy Joe came back to release a new album entited "Freedom's Child" in 2002.

Billy Joe Shaver is known for his hit "Live Forever" performed by The Highwaymen. He also wrote numerous songs for artists such as Patty Loveless and Willie Nelson. For his efforts, the Americana Music Convention awarded him their Lifetime Achievement Award in Songwriting.[7]

In 1999, Shaver was invited to perform at the Grand Ole Opry. In November of 2005, Billy Joe Shaver performed on the CMT Outlaws 2005. In 2006, Shaver was inducted in the Texas Country Music Hall of Fame. He recently served as spiritual advisor to Texas independent gubernatorial candidate Kinky Friedman. He currently lives in Waco, Texas.

In 1996, Shaver took a part in the movie The Apostle, playing opposite Robert Duvall. He had additional speaking roles in the Duvall film Secondhand Lions (2003) and in The Wendell Baker Story (2005).

Police in Lorena, TX about 10 miles south of Waco, issued arrest warrants for Shaver April 2, 2007 on charges of aggravated assault and possessing a firearm in a prohibited place. This was in connection with an incident outside a tavern, Papa Joe's Texas Saloon in Lorena on March 31, 2007, in which Shaver shot a man, Billy Bryant Coker, in the face with a handgun. Coker's injuries were reported as not life-threatening.

Witnesses interviewed by police report hearing Shaver saying "where do you want it?" and then, after the shot was fired, "Tell me you are sorry" and "No one tells me to shut up." Coker told police the attack was unprovoked. Shaver's attorney declared that Shaver had shot Coker "in self-defense" after Coker threatened Shaver with a knife.[4]

After unsuccessfully attempting to surrender to police in Austin, TX, who were unaware of the warrant, Shaver turned himself in at McLennan County Jail in Waco, TX on Tuesday, April 3. He was released after an hour on $50,000 bond and gave his scheduled performance at Waterloo Records in Austin that evening,[5][6] where he reportedly told fans, "Don't forget to pray for me, and tell your kids to pray for me, too."


In 2004, a documentary of his life, A Portrait of Billy Joe was released. The documentary was directed by Luciana Pedraza.


Quotations
"If you don't love Jesus, you can go to hell."
"May the God of your choice bless you." (Lent to his friend Kinky Friedman for his gubernatorial campaign)

Long in the Tooth

Storyteller: Live At The Bluebird

Billy And The Kid

Live From Down Under (Feat. Kinky Friedman) CD2

Live From Down Under (Feat. Kinky Friedman) CD1