Lil Jon & The East Side Boyz 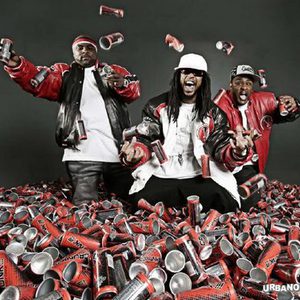 Lil Jon & The East Side Boyz are a crunk rap group from Atlanta, Georgia formed in 1995 by Lil Jon and fellow rappers Sam "Big Sam" Norris and Wendell "Lil Bo" Neal. They are best known for their hit single Get Low which featured fellow Atlanta group the Ying Yang Twins, reached #1 on the Billboard 100 and was a breakthrough single for the crunk genre. They released their debut album Get Crunk, Who U Wit: Da Album in 1997 and have since released 2000's We Get Crunk, 2001's Put Yo Hood Up, 2002's Kings of Crunk and 2004's Crunk Juice.

The group signed to the Atlanta-based Mirror Image Records and were distributed by Ichiban Records. In 1997, Lil Jon & the East Side Boyz debuted with Get Crunk, Who U Wit: Da Album. It included singles "Who U Wit?" and "Shawty Freak a Lil' Sumthin'", the latter of which came out in 1998. Lil Jon said that in order to really appreciate these songs you would have to dumb yourself down a 4th grade levels, as he made music for people who could not read, write, or understand anything with more subject matter than that. Both singles charted on the Billboard Hot R&B/Hip-Hop Songs chart at #70 and #62 respectively. Under BME Recordings, the group followed in 2000 with We Still Crunk aka The Death Of Real Hip Hop, and scored a hit with "I Like Dem Girlz", which reached #55 on the R&B chart and #3 on the Hot Rap Tracks chart. Lil Jon & the East Side Boyz signed to TVT Records in 2001 and debuted there with Put Yo Hood Up, which combined previously released tracks with new ones. The group's first nationally played single was "Bia' Bia'", a song written about and dedicated to Lil Jon's girlfriend at the time. It featured rappers Ludacris, Too Short, Big Kapp, and Chyna Whyte. "Bia' Bia'" peaked at #97 on the Billboard Hot 100 and #47 on the Billboard R&B chart.

Put Yo Hood Up