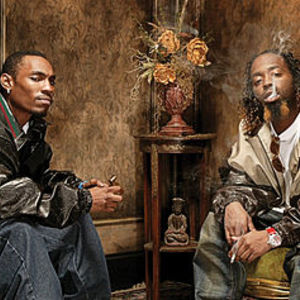 The Ying Yang Twins are a crunk rap duo from Atlanta, Georgia consisting of Eric "Kaine" Jackson and Deongelo "D-Roc" Holmes. They are best known for being featured on Lil Jon & The East Side Boyz hit single Get Low which reached #1 on the Billboard 100. After forming in 2000 they released their debut album Thug Walkin' the same year and followed this with 2002's Alley: The Return of the Ying Yang Twins, 2003's Me & My Brother, 2005's U.S.A. (United State of Atlanta), 2006's Chemically Imbalanced and 2009's Ying Yang Forever.

They first came to notice in 2000 with the single "Whistle While You Twurk" which got play on urban and pop radio stations and peaked at #16 on the US R&B/Hip-Hop chart. Their full-length debut album, Thug Walkin', came out later that year. Their next album, Alley: The Return of the Ying Yang Twins (2002) failed to sell 500,000 units and they didn't really achieve popularity until they collaborated with the self-styled "King of Crunk" Lil Jon on his 2002 single "Get Low". The song was a huge club and radio hit and the duo subsequently signed a deal with TVT Records.

Their first album for the label, Me & My Brother was certified platinum on April 12, 2005[1] and yielded three more hits ? "Whats Happnin!", "Naggin'" and the popular Lil Jon collaboration "Salt Shaker". The same year the duo appeared on Britney Spears' album In the Zone and her television special of the same name. In 2004, TVT released My Brother & Me, an album composed largely of remixes which featured a bonus DVD of the group's videos. A new album U.S.A. (United State of Atlanta) appeared in the summer of 2005 as its singles "Wait (The Whisper Song)", "Badd", and "Shake" were dominating urban radio, and U.S.A. (Still United), a collection of outtakes, remixes, and collaborations similar to My Brother & Me followed in December 2005. It too was accompanied by a DVD featuring music videos and other footage from the U.S.A. (United State of Atlanta) period.

The group's fifth album Chemically Imbalanced was released in November 2006. For this album the Twins collaborated with producers Wyclef Jean and Jerry 'Wonder' Duplessis in addition to Mr. Collipark (who produced a majority of the songs on the group's previous albums). The first two singles were the Hall & Oates-sampling "Dangerous", featuring Wyclef Jean, and "Jigglin'".

They have both parted ways with Mr. Collipark after their last album, Chemically Imbalanced, and their future albums will not be distributed through TVT Records. They have also planned to work on their own record label and artists. D-Roc owns Punnn!!! Entertainmnet with Da Muzicians and Nue Breed as the first two duo signees. Kaine owns EA Productions, and has his group Hard Boyz, as well as Countrie Biggz, Geeskie, and Kuzin Big Boyy. Kaine also plans on releasing a solo album in the near future.

Twerkin In The Mirror (CDS)