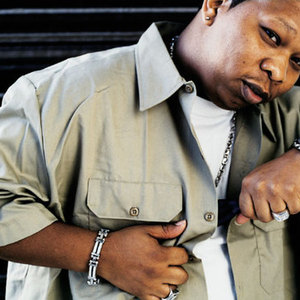 Mannie Fresh (born Byron Thomas on March 20, 1974), is the former in-house producer for the successful New Orleans-based record label Cash Money Records. Unlike most modern hip-hop producers, Fresh does very little outside production work, instead focusing on producing whole albums for Cash Money artists. Among his biggest hit productions are "Back that Azz Up" by Juvenile, "Tha Block is Hot" by Lil' Wayne, and "Bling Bling" by B.G.

The New Orleans native got his start in 1984 as a member of New York Incorporated, arguably New Orleans' first hip-hop crew. The parties Mannie started to DJ around this time were to become legendary and brought him to the attention of rapper Gregory D.

Mannie Fresh became the DJ and producer for Gregory D, and in 1987 on D&D Records, they released the album entitled "Throwdown". Though they mostly produced what would be considered Miami Bass at the time, they followed it up with an album entitled D Rules the Nation on Yo! Records in 1989. The album only contained a couple of Miami Bass style tracks, focusing more on creating a style unique to New Orleans. After they landed a deal with MCA Records, Mannie became dissatisfied with MCA's handling of the project and decided to get out of the partnership. Gregory D continued to make albums that did not feature Mannie Fresh, but the duo are seen as early pioneers of Bounce Music.

Fresh also works as a recording artist, both solo and with the wealthy multi-millionaire Cash Money CEO Brian "Baby" Williams as a member of the Big Tymers. Mannie Fresh recently opened a car shop in Humble, Texas (a suburb of Houston) called "Fresh Rydes" [1]

Mannie Fresh recently announced his unexpected departure from Cash Money records, but maintains that it was strictly a business decision and he holds no ill-will towards his longtime home. On the contrary, his departure has allowed him to get back on good terms with the artists who had left Cash Money earlier, most notably B.G. (with whom he collaborated on "Move Around") and Juvenile (with whom he collaborated on "Animal"). The three are rumored to be releasing a new album by the end of 2006.

Return Of The Ballin'