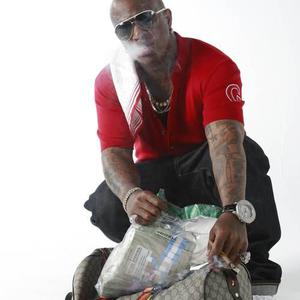 Bryan Williams (born February 15, 1969), better known by his stage name Birdman or Baby, is an American rapper and record executive from New Orleans, Louisiana. He is the co-founder of Cash Money Records and one half of the duo Big Tymers. Along with his releases with Big Tymers and for his solo career, Birdman recorded a collaboration album and numerous tracks with Lil Wayne. Birdman was born and raised in Uptown New Orleans.

Birdman was born and raised in Uptown New Orleans. With his brother Ronald "Slim" Williams, Birdman founded Cash Money Records in 1991. He used his first moniker B-32 (Baby with the 32 Golds) and released his only independent album I Need a Bag of Dope in 1993.

In 2002 Birdman released his self-titled debut studio album, Birdman, with the singles "Do That" and "What Happened to That Boy" (with Clipse). Since that album, Birdman made guest performances on the singles "Let's Get Down" by Bow Wow, "Hell Yeah" by Ginuwine, and "Bounce Back" by Juvenile.

Birdman released his third studio album Fast Money in 2005, Fast Money spawned the singles "Get Your Shine On" and "Neck of the Woods", both of which featured Lil Wayne. For Lil Wayne, Birdman produced and performed on tracks on Tha Carter and Tha Carter II.

Birdman & Lil' Wayne released an album titled Like Father, Like Son. It was certified Gold and spawned three singles, including "Stuntin' Like My Daddy" and "Leather So Soft". He was also featured on the remixes of the bestselling rap singles "We Fly High" by Jim Jones and "Make It Rain" by Fat Joe. In 2007 Birdman released his fourth studio album, 5 * Stunna. The first single, "Pop Bottles," featuring Lil Wayne and Jadakiss, was a hit, as well as the second single "100 Million," which featured Rick Ross, Lil Wayne, Young Jeezy, Dre & DJ Khaled. The third single featuring Lil Wayne, titled "I Run This," was a hit as well.

In 2010 he was going to release an album titled "Priceless 2" a sequel to his previous album, but changed it to "Bigger Than Life'' The first promotional single was titled "Loyalty" and featured Lil Wayne and Tyga. Other collaborations will come from Rick Ross, Young Jeezy, Bun B and Drake. The album will drop during first quater of 2011. He released a music video for a possible future single, "My Jewel" which features Bun B and Young Jeezy. He released the first official single "Fire Flame" on November 22, 2010 which features Lil Wayne.

Birdman is set to release an album with Rick Ross titled The H sometime in the future. A second Father Like Son album with Lil Wayne is to be released during June 2011 around Fathers Day.

Birdman has an estimated net worth of over $400 million. Much of that money has come from a variety of business deals with Universal Music Group as well as from sales within Cash Money Records. His total net worth makes him the second richest rapper in history behind Jay-Z.