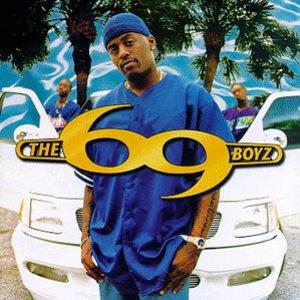 69 Boyz are a Miami bass and hip-hop group originating from Jacksonville, Florida, but who work mainly in Orlando, Florida. The group was created by producers C.C. Lemonhead and Jay Ski (of Chill Deal, Quad City DJs and 95 South), and consists of rappers Thrill Van, Barry "Fast" Wright, Greg "Slow" Thomas, and Rottweiler Mike Mike. The name of the group derives from the fact that all of it's members were born in 1969; it is not, as has been suggested, related to the 69 sex position.

The group had success in the summer of 1994 with its first single, "Tootsee Roll". The song went double platinum and reached #8 on the Billboard Hot 100 and R&B charts. This song became popular amongst Jock Jams fans. Their only other successful single to date is 1998's "Woof Woof", written for the film Dr. Doolittle starring Eddie Murphy. The song reached #31 on the Billboard Hot 100.

The Wait Is Over