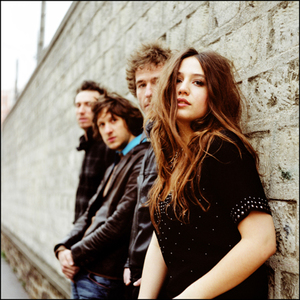 Izia Higelin was born in Paris, France on 24 September 1990. She was influenced by music from an early age when her father, singer Jacques Higelin, introduced her to jazz and British pop music. At the age of seven, she formed a duo with her father; she provided the vocals while he played piano. When she was 13, Higelin started to take an interest in rock bands such as Nirvana and Led Zeppelin. At this time, she wrote her first song, titled "Hey Bitch", which later featured on her debut album.

A year later, she met Caravan Palace bassist Antoine Toutsou through her parents and the pair played their first live show in 2004. Six months later, her backing group was expanded to three people when Higelin and Toutsou were joined by S?bastien Hoog and Vincent Polycarpe. She left school at the age of 15 in order to concentrate on a career in music.

In 2006, Higelin released her first extended play and the following year she opened for Iggy & the Stooges at the Printemps de Bourges music festival. She consequently embarked on a tour of France, which consisted of over thirty dates. On 8 June 2009, her eponymous debut studio album, Izia was released in France. In some reviews, the album garnered comparisons to Janis Joplin. The album performed reasonably well in the French albums chart, achieving a peak position of #31 and staying in the top 100 for 17 consecutive weeks.