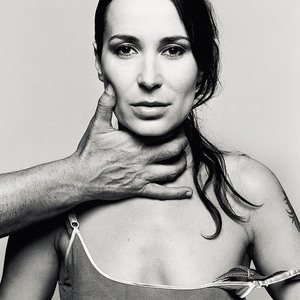 Zazie (born Isabelle de Truchis de Varennes on 18 April 1964 in Boulogne-Billancourt) is a French singer and songwriter. She also co-produces her own albums with other producers. Zazie's mother was an architect and her father a music teacher. Her songs range from upbeat rock or pop songs to languid downtempo tunes and are characterised by the wit of their lyrics based on puns, alliterations, homophones and double-entendres.

Zazie's mother was an architect and her father a music teacher. Her songs range from upbeat rock or pop songs to languid downtempo tunes and are characterised by the wit of their lyrics based on puns, alliterations, homophones and double-entendres.

In 1995, she released her sophomore album Zen, which was co-written and co-produced with Vincent-Marie Bouvot. It included the singles "Zen" and "Homme Sweet Homme". Her 1996 single "Un point c'est toi" from the same album was discussed on Canada's MuchMusic TV program Too Much 4 Much due to its controversial content. Ultimately, the discussion panel deemed the video okay for audiences. In the video, a group of four smitten women, including Zazie, follow a pair of men down to a lake. There, the two men strip off their clothes and swim in the water. Zazie fantasizes about undressing one of the men and kissing him. To shock of the women, however, the two men kiss each other.
In 1997, Pascal Obispo and Zazie released the single "Les Meilleurs Ennemis".

Her 1998 album Made in Love was co-produced by Ali Staton, Pierre Jaconelli, and herself. The album photos were taken by fashion designer Jean-Baptiste Mondino. The songs "?a Fait Mal Et ?a Fait Rien", "Tous des anges", and "Tout Le Monde" were released as singles. This album was followed by a live album, Made in Live, the next year. In 1999 she also wrote a song for Jane Birkin in Jane Birkin's album .
In 2001, Zazie dueted with Axel Bauer on the single "A Ma Place". It was her most successful single in France, reaching number four on the French charts.

Her 2004 album Rod?o was co-produced and co-written with Jean-Pierre Pilot and Philippe Paradis. A short film "Rod?o indien" was made using songs from the album as a soundtrack. Zazie played the role of an Indian woman who leaves her cheating husband. She followed this album up with a live album, Rod?o Tour in 2006.

In 2007 her sixth studio album "Totem" was released and debuted at number 1. The second single (but first commercially released) was "Je Suis Un Homme" which became Zazie's first solo top ten hit in France. In Winter 2008 a best of album "Zest of Zazie" was released which as well as past hits contained two new songs "Fm Air" and "Un peu beaucoup" and live recordings.