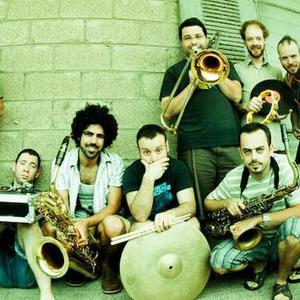 There are three bands with the name The Apples. The first is an Acid Jazz group from Israel. The second is a girl group from Czech Republic who perform 60's music. The third is a band from Belarus who perform Beatles and other's artists rock'n'roll songs. The first group began in israel in 2002 with the core of electronic artists Schoolmaster & Mixmonster and the steadfast rhythm unit of Shai Ran and Yoni Halevy. Here is their myspace profile http://www.myspace.com/theapplesmusic.

The first group began in Israel in 2002 with the core of electronic artists Schoolmaster & Mixmonster and the steadfast rhythm unit of Shai Ran and Yoni Halevy. Here is their myspace profile http://www.myspace.com/theapplesmusic. The idea was to lay down a funk foundation laced with live samples and organic effects, with a jazz-based front line of improvising horns. The original sessions and concerts were non-stop sets of spontaneous, fresh compositions. Over the following two years of constant performing in small clubs as well as outdoor festivals and dancehalls, songs were established. The first album, Mitz (juice in Hebrew) is a compilation of these creations, captured on a single recording session in one small room. It has gone on to sell out its first three editions and to create a stir on the music scene, inspiring similar groups to pick up on the organic/electro audio vibe. The follow up, Attention! (released October 2005)- finds the group delving deeper into old school funk, soul jazz, aggressive horn lines, wider turntable usage and middle-eastern beats. The Apples' music enjoys airtime on various radio stations and is featured on music television programs and commercials. The tunes are constantly growing and never sounds the same way twice, for the ensemble is forever changing up the format, responding to each other and to the audience's energy.

The seconds are a girls' band performing music of the 60's. English sung part of our repertoire is formed not only The Apples by unforgettable hits of that era (by The Beatles, The Hollies, Neil Sedaka, Chubby Checker, and Lulu; others are from musicals Dirty Dancing, The Hair etc.). Theirs own songs in Czech have a mood of the 60's as well as big-beat dynamics of today.

More info can be found on on the band's website.