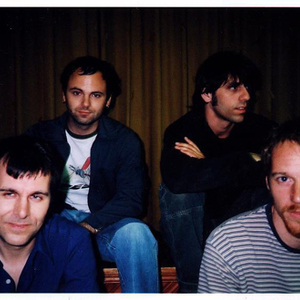 Against a backdrop of rhythmic guitars, moving bass lines and frenetic drums are tuneful melodies and harmonies that will have you humming long after the show is over or the cd is put away. Their name is inspired by a passage in Kurt Vonnegut's novel Breakfast of Champions. Comprised of Jake on drums and Rej on guitars and vocals, this dynamic duo subscribes to the indie school of thought. They have been toiling in their basement studio for months, recording and mixing their album. The result is their debut cd entitled 9 Songs.

Their name is inspired by a passage in Kurt Vonnegut's novel Breakfast of Champions. Comprised of Jake on drums and Rej on guitars and vocals, this dynamic duo subscribes to the indie school of thought. They have been toiling in their basement studio for months, recording and mixing their album. The result is their debut cd entitled 9 Songs.

Their music is a blend of modern psychedelia and power pop. Their songs meander through multi-layered arrangements steeped in saturation often with a bent towards upbeat melancholia.

Upon hearing the Butterflies in a live setting, you will be compelled to ask: "Are there only 2 musicians up there?" Their sound is surprisingly full and they entertain by virtue of their energetic tight playing and their fresh material. On occasion, fellow musicians drop in on the act. This band has had experience on the local Winnipeg scene. In their previous incarnations as Mayonnaise and the Groove, they have performed at many venues and outdoor festivals.

They have paired down in numbers, and the metamorphosis is complete. Tune in to the Telepathic Butterflies ? they are coming your way!
Rejean Ricard: Rejean was born and raised in Winnipeg. He began playing guitar at the age of 13 and spent the next 10 years holed up in his basement honing his guitar playing and song-writing skills, periodically coming up for air.

His prolific song-writing abilities have enabled him to create an expansive catalogue of well-crafted tunes, which made the picking process for the CD a daunting task. He is an avid music listener with a penchant for ?60's rock, alternative pop and spiderman music. His rocking chair and headphones are his friends.

Jacques Dubois: Like Rej, Jacques grew up in a francophone household in St.Norbert. His parents saw the wisdom in buying him a real drum set after bowls, buckets and legos went missing to build a makeshift kit in his room. Thus began a veritable passion for beats and rhythms. Listeners never fail to remark on Jake's solid playing and varied fills. He is always up for a jam session. He plays a regular drum kit, the congas, the tablas and the dashboard. His inspirations are Keith Moon, John Bonham and the great outdoors. He and Rej have been playing together for 10 years.

Eric Van Buren: The latest member to join the butterfly contingent. Formerly the bassist for Grand Theft Canoe/Voit, he retired to his cocoon when the band called it quits in '98. His affinity for retro-pop and his adept bass playing make him a valuable addition to the band. And, like all good bass players, he remains somewhat enigmatic to the rest of the group.

Angus Kirkpatrick: Angus can best be described as a rock'n'roll encyclopedia and veritable walking jukebox. His penchant for English pop/rock undoubtedly stems from his early exposure to music while growing up in England. Equally comfortable on bass and guitar, Angus was a founding member of Grand Theft Canoe and also currently fronts Angus and the Pacemakers along with Rod Slaughter and Sean Allum of Duotang.

Rob Pachol: The most animated butterfly, on and off the stage. He is a veteran of the Winnipeg music scene, having met Rej when both were members of The Driving Wheel - a mod/English soul outfit led by Colin Bryce. His guitar prowess never overshadows his own intruitive melodic sensibilities. In true rock'n'roll fashion, he sports an authentic bongo cut. He and Rej are currently moonlighting with Winnipeg pub-rock unit The Windups.