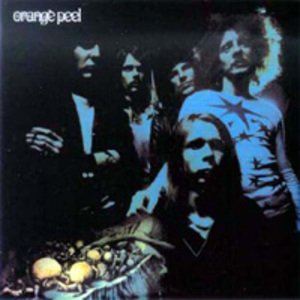 Little is known about the origins of Orange Peel, except that they were based in Hanau (a town west of Frankfurt and Offenbach) and were established circa 1967. On their debut single the band featured Michael Winzkowski (also later of Nosferatu and Epsilon), and they proved quite seminal, with Heinrich Mohn later following Winzkowski to Epsilon, Peter Bischof moving on to Emergency, and Curt Cress becoming amongst the most prolific of German rock and jazz drummers.

The debut single was the typical blues-rock of the era, notably influenced by the likes of John Mayall and Steamhammer, but with that Krautrocky heavy sound typical of bands from the Frankfurt region. It hinted more at the Epsilon style (understandably) than the Orange Peel that was to follow.

Orange Peel's LP was amongst the most psychedelic of heavy progressive albums, not least side one's opus "You Can't Change Them All", a veritable masterwork of heavy riffing organ rock, kind of Egg and Pink Floyd jamming Krautrock style, featuring vast guitar excursions, and Peter Bischof's gutsy blues vocals. It reaches dizzy heights. As a bit of light relief, the second side starts with two shorter songs, the second being the album's odd track out - an unusual arrangement of "Tobacco Road" given a very gutter-blues feeling. And then there's the awesome "We Still Try To Change" encompassing half of the second side, which trips out beyond the realms of side one's opus, like a crazed Arzachel, close to Os Mundi at their freakiest, with guitars and dissonant organ locked in a spine-tinglingly intense battle.

Orange Peel should have been much widely successful, as they were a really talented band. A live recording is also known to exist that contains no material at all from the LP, with the only recognisable song being a rather rough and ready version of "I Got No Time". After the band disbanded, Leslie Link stayed in his home town establishing Leslie's Guitar Village frequented by all top guitarists in the region.