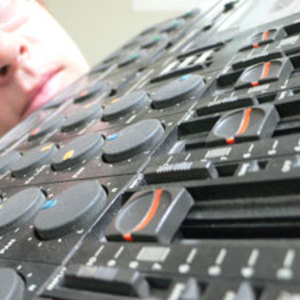 At the dawn of the 1990s, Allen Clapp set out to change the world with a Radio Shack tie-clip microphone and his Tascam Porta One four-track recorder. The odds were squarely against him. Even to the casual observer, Clapp was barely equipped to record a decent demo tape. But most songwriters with better studios lacked the force that has been Clapp's secret weapon during his recording career: a seemingly limitless supply of optimism. A keen ear for melody didn't hurt, either.

The odds were squarely against him.

Even to the casual observer, Clapp was barely equipped to record a decent demo tape. But most songwriters with better studios lacked the force that has been Clapp's secret weapon during his recording career: a seemingly limitless supply of optimism. A keen ear for melody didn't hurt, either.

At the time, Clapp's first band had just broken up. Half of his Foster City, Calif. bandmates split off to become garage-rock monsters The Mummies, and the other half went on to form a group with a pre-Counting Crows Adam Duritz.

Not content to merge onto the garage-rock or classic-rock highways, Clapp set out on the road less traveled. Soon he found himself immersed in the little-known world of Indiepop, listening to artists on homespun labels and communicating through hand-written letters and Xeroxed fanzines.

Attracted by the scene's honesty and DIY aesthetic, Clapp poured his heart and soul into recording; making entire worlds occur within the confines of 2-minute pop songs.

In the pre-Belle-and-Sebastian pop landscape, Clapp's combination of classic melodies and lyrics that were equally parts fey and clever struck a chord. His delightfully economical first single, "A Change in the Weather" (1991) introduced the world to the breezy melodies and spry rhyming that would become his hallmark.

His first songs were released on Four Letter Words -- a label and fanzine run by his former bandmate Maz Kattuah -- and the limited pressings sold out quickly.

Soon, he was asked by America's premiere Indiepop label, Bus Stop, to put out a 45 -- "Mystery Lawn" (1992) -- and then a full-length LP, "One Hundred Percent Chance of Rain," (1994) which was credited to "Allen Clapp and his Orchestra." Really, it was just Mr. Clapp, his four-track recorder and a fertile imagination.

It was during these sessions that it hit him.

Sitting in his 1967 Ford Falcon in the parking lot of a Lucky supermarket in San Carlos, Calif. after doing some routine shopping, a melody struck him like a bolt of lightning.

Before he could turn the key in the ignition, the world stopped. He sat behind the wheel, comatose, as the song structure, lyrics, harmonies and arrangement flooded over him. When his surroundings came back into focus, he drove home to start recording a song called "Something Strange Happens."

The song has taken on a life of its own and stands as a testimony to what some have called the genius of Allen Clapp. A love song electrified by spiritual imagery and a chorus of major-sixths that glides comet-like over a bouncy R&B bass line, the recording spawned an aussie reviewer to proclaim it "The soundtrack to cocktail parties so cool that nobody is capable of hosting them."*

Then again, he was also called a ?male Judy Collins? by Option Magazine the year before in a review of his ?Mystery Lawn,? EP so go figure. So the guy can really sing. . . is this a problem?

Soon after, Allen formed a band with his wife, Jill, on bass, and his old former bandmates -- now former Mummies -- Larry Winther on drums and Kattuah on guitar. Minty Fresh signed the group, and after a lineup change, the band rechristened themselves The Orange Peels, who have continued to change lineups and gone on to record for SpinART and Parasol records.

"One Hundred Percent Chance of Rain" was reissued in 2000 by Bus Stop on CD and LP. Clapp released a second solo album in 2002, a spacey soft-rock exploration for March Records called "Available Light."

He is currently writing for a new Orange Peels record and producing albums in the garage of his modernistic Eichler tract home in Sunnyvale Calif.