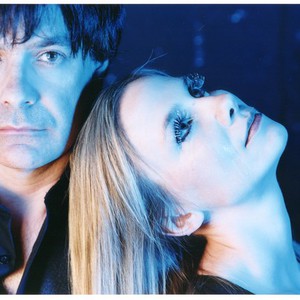 Cinerama from Leeds, UK started life as a duo in 1997, The Wedding Present's David Gedge and his girlfriend Sally Murrell, together with a shifting line-up of collaborators. 1998's Va Va Voom "turbo-driven melodies and bittersweet vignettes taking in everything from John Barry to the Zombies" (The Times) featured The Church's Marty Willson-Piper and Emma Pollock from The Delgados. Then later in 1998, Gedge rescued the rhythm section of the disbanded Goya Dress ([Terry de Castro and Simon Pearson) and combined them with Wedding Present guitarist Simon Cleave.

Surely on pace to rival the abundant shelf filling of The Wedding Present, Cinerama released a clutch of singles in support of their debut LP, as well as a number prior to 2000's Steve Albini-recorded Disco Volante "dangerously, seductively sweet" (Melody Maker). Notable were the heart-rending Superman (complete with alternative Spanish take) and the six and a half minute epic Health And Efficiency (also available in French!).

The third Cinerama studio album, Torino (2002), was much darker than the first two, with Gedge returning to a guitar-driven sound and deciding to write predominantly about infidelity. "Cinerama are escaping the shadow of Gedge's illustrious indie-legend past. Torino is a giant beast of adulterous lyrical fantasies, cult soundtrack flourishes and the screams of Albini-engineered guitars" (Uncut).

At the end of 2002, Gedge and Murrell split up, and he decided to depart from Leeds, moving to Seattle and busying himself with a new Cinerama album which eventually became the new Wedding Present LP, (Take Fountain). For him, it was full circle and Cinerama was no more after 2004.

Seven Wonders Of The World CD2

Seven Wonders Of The World CD1