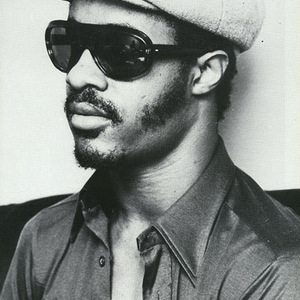 Stevland Hardaway Morris (born May 13, 1950, in Saginaw, Michigan as Stevland Hardaway Judkins), known by his stage name Stevie Wonder, is a renowned American singer-songwriter, multi-instrumentalist, record producer and activist. Blind since shortly after birth, Wonder signed with Motown's Tamla label at the age of eleven, and continues to perform and record for Motown to this day. To date, Wonder has recorded more than thirty U.S.

top ten hits and received twenty-two Grammy Awards, the most ever awarded to a male solo artist. In 2008, Billboard magazine named Wonder as 5th in their list of the Hot 100 All-Time Top Artists. Wonder is also noted for his work as an activist for political causes. In 2009, Wonder was named a United Nations Messenger of Peace.

When Wonder was four, his mother left his father and moved herself and her children to Detroit. She changed her name back to Lula Hardaway and later changed her son's surname to Morris, partly because of relatives. Morris has remained Stevie Wonder's legal name ever since.

In 1961 when he signed with Motown. Wonder has recorded more than thirty top-ten hits, won twenty-two Grammys (the most ever won by a solo artist), including one Lifetime Achievement Award, and has been inducted into both the Rock and Roll and Songwriters halls of fame.

Blind from infancy, Wonder signed with Motown Records at the age of eleven and has become one of the most successful and well-known artists on the label, with nine U.S. number-one hits to his name, thirty-five U.S. albums - twenty-eight major studio releases - and album sales totalling more than seventy-two million units. He has recorded several critically acclaimed albums and hit singles, and writes and produces songs for many of his labelmates and outside artists. A multi-instrumentalist, Wonder plays the drums, guitar, synthesisers, congas, and most famously the piano, harmonica, and keyboards.

His contribution to worldwide social and political change is just as impressive, with Wonder championing the effort to make Martin Luther King's birthday a national holiday, as well as becoming a driving force behind 1985's USA for Africa campaign.

As one critic wrote about Wonder's ingenious musical techniques: "He was simply the best at humanizing synthesizers.'" His mind-bending fusion of innovative beats and ear-to-the street lyrical sensibilities single-handedly revitalized American songwriting in the 1970s. Wonder forged his divergent styles into a trademark sound, putting his musical signature on a quartet of albums that would change music forever: 1972's Talking Book, 1973's Innervisions, 1974's Fullfillingness' First Finale, and 1976's Songs in the Key of Life. By the end of the decade, Wonder had won a record fifteen Grammys, as well as numerous other awards.

He continued his hit-making journey in the decades to follow, writing, among other classics, his 1982 collaboration with Paul McCartney, "Ebony and Ivory," which remained number one for seven weeks in a row. 1984's The Woman in Red soundtrack produced the enduring classic "I Just Called to Say I Love You", yet another number-one hit that netted him an Academy Award.

In 1989 Wonder was inducted into the Rock and Roll Hall of Fame alongside The Rolling Stones.

Two recent Stevie Wonder collections capture the depth of his career: At the Close of the Century, 1999's first authorised boxed set, a four-CD, seventy-song collection with additional bonus tracks, and 2002's The Definitive Collection, a twenty-one song CD, including fifteen of Wonder's number ones, with songs from 1963 to 1985.

Inducted into the Songwriter's Hall of Fame in 2002, he was the first African American to be awarded the Johnny Mercer Award in 2004, in recognition of a lifetime of outstanding creative works. At the end of the year he was presented with Billboard's highest honour for creative achievement, The Billboard Century Award, whose past recipients include George Harrison, Joni Mitchell, and John Mellencamp. In 2003, Rolling Stone magazine cited four Wonder albums in their list of the 500 Greatest Albums of All Time, including Innervisions (23rd) and Songs in the Key of Life (56th).

Let Me Entertain You