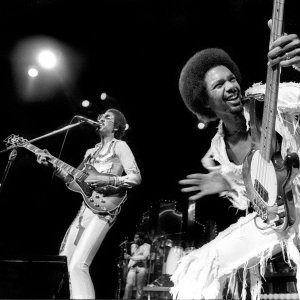 A top group of the funk & disco era, this guitar & bass playing duo featured two brothers, and in 1977 their single Strawberry Letter 23 ( written by Shuggie Otis) was a top hit on the Pop and R&B charts. In 1980 their single Stomp! was another huge hit, reaching #1, and appearing on the album "Light Up The Night" which itself rose to number 5 on the Billboard album charts, being mentioned as number 46 on the year end "Top 100 LPs of 1980" list in Rolling Stone Magazine. Other hit top 40 singles included I'll Be Good To You ( #3 1976) and Get The Funk Out Ma Face ( which hit #30 in 1976)

George Johnson and Louis Johnson (aka Thunder Thumbs and Lighting Licks) or Brothers Johnson, originally began their career in Southern California backing live shows of acts like Bobby Womack and The Supremes. They eventually joined Billy Preston's band, and Preston recorded their songs Music in My Life and The Kids and Me before they left his group in 1973. They performed as studio musicians in LA and songwriters for Quincy Jones on his LP Mellow Madness, for which he recorded their compositions Is It Love That We're Missing? and Just a Taste of Me before he went on and produced their hit debut album in 1976 which hit #1 on the R&B charts. Their "Right On Time" album reached number 13 on the Billboard album charts the next year and a followup "Blam!!" came out in August 1978 and reached number 7 on the Billboard 200.

The duo eventually split up in 1982, Louis Johnson played bass on Michael Jackson's Thriller album and George released a solo single on Quincy Jones' Qwest label and contributed guitar to albums including a project done with Steve Lorber and others.

They regrouped in the early 2000's and play sporadicaclly together, and occasionally with other funk musicians in amalgamations including Michael Henderson, Adina Howard, Ray Parker Jr., and others.

The Very Best Of (Strawberry Letter 23)

Light Up The Night