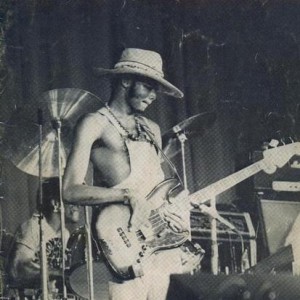 Michael Henderson (July 7, 1951-present) is a bassist and vocalist best known for his work with Miles Davis in the early 1970s, providing a deep funky groove to early fusion albums such as A Tribute to Jack Johnson, Pangaea (album), and Live-Evil. He was the only musician to play with Miles in both phases of his electric period, starting in 1970 at the age of 18 and continuing until Miles's semi-retirement in 1976.

With deep, funky grooves and a pop sensibility, he was one of the first notable bassists of the fusion era as well as being one of the most influential jazz and soul musicians of the past 40 years. In addition to Miles, he has played and recorded with Marvin Gaye, Aretha Franklin, Stevie Wonder, the Dramatics, Doctor John, and others. He is considered to be one of the three greatest motown bassists, along with Bob Babbitt and his primary influence, James Jamerson.

Before working with Miles, Henderson had been touring with Stevie Wonder, whom he met at the Regal in Chicago while warming up for a gig. Miles Davis saw the young Henderson performing at the Copacabana (nightclub) in New York in early 1970 and reportedly said to Wonder simply "I'm takin' your fuckin' bass player."

After almost seven years with Miles, Henderson focused on songwriting and singing in a solo career that produced multiple hit songs and albums for Arista Records until his retirement in 1986. Although known primarily for ballads, he was an influential funk player whose riffs and songs have been widely covered. To date his solo recordings have sold millions of albums.

In recent years, he has experienced a resurgence in popularity as many of his bass riffs have been imitated by players seeking the fat, deep grooves of the motown sound. His bass riffs, from such hits as "Valentine Love" and "You are my Starship," have been sampled by the likes of Snoop Dogg and L.L. Cool J, and his songs have been covered by Rick James, Wayman Tisdale, and Sugar Ray, and many more!

He plays shows intermittently enthralling audiences with classic Michael Henderson music such as the very funky "WIDE RECEIVER" "GEEK YOU UP" "YOU ARE MY STARSHIP" "VALENTINE LOVE" "BE MY GIRL" LET ME LOVE YOU" the famous duets IE., Roberta Flack, "AT THE CONCERT" "Phyllis Hyman "CAN'T WE FALL IN LOVE AGAIN" Rena Scott "TAKE ME, I'M YOURS" Jean Carne on "VALENTINE LOVE" and additional tracks ranging from great Bass Instrumentals to Sexy Ballads to the very Funky!
Currently, Henderson is dilligently working and recording on new material to electrify new audiences with his vocal ability and bass playing prowess! This child prodigy only recently played London's Legendary Ronnie Scott's to "SOLD OUT" audiences over a three night stint, with the new and improved, "MICHAEL HENDERSON'S...ELECTRIC MILES"!!! Read all about it at www.myspace.com/michaelhendersonelectric Also, don't forget to join the MICHAEL HENDERSON FAN PAGE on FACEBOOK! http://www.facebook.com/1michaelhenderson?ref=profile#/pages/MICHAEL-HENDERSON/131642907008

Do It All (Vinyl)

In The Night-Time (Vinyl)