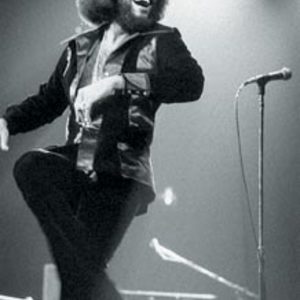 Billy Preston (9 September, 1946 - 6 June, 2006) was a child prodigy pianist. He performed with Mahalia Jackson at the age of 16 and appeared as a young W.C. Handy in a 1958 bio pic. His first solo record was a gospel album called "16 Year Old Soul". Preston first came to widespread attention of a U.S. mainstream audience as the organist (and sometimes vocalist) in the house band on the television show "Shindig," popular during 1964-66.

Preston first came to widespread attention of a U.S. mainstream audience as the organist (and sometimes vocalist) in the house band on the television show "Shindig," popular during 1964-66.

On tour backing Little Richard & Sam Cooke he met the Beatles (early in their career) in Hamburg, Germany (1962). He was later invited by George Harrison to join The Beatles in the studio for the filming/recording of Let It Be (1970). Preston's most memorable performance with the Beatles is on the track Get Back.

The apparent reason for the collaboration was the project was being done live?without overdubs?and the Beatles wanted a second keyboardist. Preston's soulful style was to compliment the rhythm-and-blues approach the Beatles had for this album. His was a genre they'd grown up listening to and were reaching back to/paying tribute to.

Another apparent reason for Preston's involvement was to buffer the growing tensions between the members of the band (that had started around the time of filming). Everyone set aside their differences to make Preston feel welcome at the sessions.

While Preston was never considered for permanent membership in the Beatles (despite stories to the contrary), he did continue working with them through to the end of the 60s: releasing two solo albums on Apple Records (the Beatles' label); collaborating with George Harrison on All Things Must Pass as well as joining in on The Concert for Bangladesh?one of the first significant benefit concerts of it's kind (Madison Square Gardens,1972). Preston also later made an appearance in the Beatles tribute film "Sgt. Pepper's Lonely Hearts Club Band" (1978), as the title character?Sgt. Pepper.

In addition to work with the Beatles, Preston also played and toured with The Rolling Stones playing on significant albums such as Sticky Fingers and "Exile on Main St." In the 1970s, Preston also worked with Bob Dylan playing as an accompanist on the track Blood on the Tracks and Aretha Franklin's record Young, Gifted and Black.

He worked with numerous other artists including Barbra Streisand and Miles Davis and toured with Sly and the Family Stone for a time. He also played organ with the Ray Charles big band on tour in the late 1960s. He won a Grammy Award for best pop instrumental performance for "Outa Space" (1971).

Billy Preston was also the music director and band leader for the Garry Shandling show in the '80s.

In the 80s and 90s, Preston suffered substance abuse and financial issues and spent three years in prison in 1997 for a drugs possession charge handed out earlier that year (cocaine possession and assault).

His last recordings were on the Red Hot Chili Peppers "Stadium Arcadium" album and with Neil Diamond for his "12 songs" record, both produced by Rick Rubin.

A US keyboard legend, Preston passed away at the age of 59 in a hospital in Scottsdale, Arizona, as a result of "malignant hypertension that resulted in kidney failure and other complications".

You And I (Feat. Novecento)

Music From My Heart

Drown in My Own Tears