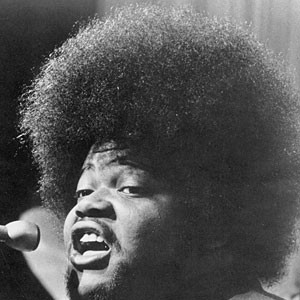 Buddy Miles is the stage name of musician George Miles, who was born September 5, 1947 in Omaha, Nebraska and passed away February 26, 2008 in Austin, Texas. Most widely known as the drummer for Jimi Hendrix's ill-fated Band of Gypsys, Miles is also the vocalist for The California Raisins commercials. Beginning his career at twelve when he joined his father's jazz band The Bebops, as a teenager Miles played in a variety of bands including Ruby & the Romantics, the Ink Spots and the Delfonics.

Beginning his career at twelve when he joined his father's jazz band The Bebops, as a teenager Miles played in a variety of bands including Ruby & the Romantics, the Ink Spots and the Delfonics.

In 1967 he formed Electric Flag with guitarist Mike Bloomfield. While the lead vocalist for the Flag was Nick Gravenites, fans of the Flag always looked forward to the numbers sung by Miles. Listen to the slow blues song "Texas" by the short-lived Flag and you will get a sense of what Miles brought to the group. The group broke up after their 2nd album, and Miles formed the Buddy Miles Express. He played with Jimi Hendrix on the Electric Ladyland album, and later formed Band of Gypsys with Hendrix. Band of Gypsys made a famous and enduring live album that was recorded in New York's Fillmore East on New Year's Eve 1969/70. However during a follow up performance a month later, Hendrix had a minor, drug-related meltdown on stage and Miles was fired by Hendrix manager, Michael Jeffrey.

It should not go unmentioned that part of Miles' appeal as a rock musician was his physical appearance. He drew many stares and smiles as he held court from the drumset in the Electric Flag days, with his American flag or sequined shirts, his high-brushed Afro, and his massive frame and smile. Buddy was an eyeful for the hippies and concertgoers of the day.

In 1986 Miles performed vocals for the California Raisins claymation ad campaign, most notably singing I Heard It Through the Grapevine. In 1986 and 1987 he also joined Santana as a vocalist, Carlos Santana being someone that he had made an album with in the early 1970s.

Food for the I

The Best Of Buddy Miles

Bicentennial Gathering Of The Tribes (Vinyl)