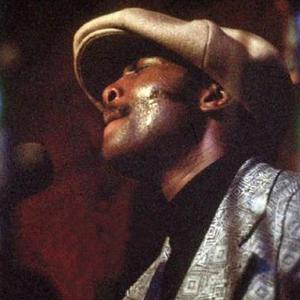 Donny Edward Hathaway (October 1, 1945 ? January 13, 1979) was an Grammy Award-winning American soul musician. He signed with Atlantic Records in 1969, and with his first single "The Ghetto" (1970), Rolling Stone magazine marked him as "a major new force in soul music." His collaborations with Roberta Flack took him to the top of the charts and won him the Grammy Award for Best Pop Performance by a Duo or Group with Vocal for the duet "Where Is The Love" in 1973. On January 13, 1979, his body was found outside the luxury hotel Essex House in New York City; his death was ruled a suicide.

Hathaway, the son of Drusella Huntley, was born in Chicago, but spent most of his youth in St. Louis. He lived with his grandmother, Martha Pitts, also known as Martha Crumwell, in the Carr Square housing project. Hathaway began singing in a church choir with his grandmother, a professional gospel singer, at the age of 3. He also played the ukulele and, fascinated by Liberace, began studying piano as a child. Hathaway began singing professionally as "Donny Pitts, The Nation's Youngest Gospel Singer". By the time he was a student at Vashon High School, he was known as a piano prodigy, which earned him a fine-arts scholarship to Howard University in 1964 where he was initiated into Alpha Phi Alpha Fraternity. He attended Howard for three years and performed with The Ric Powell Trio, a jazz trio. Hathaway received so many job offers that he left Howard without a degree in 1967.

At first, Hathaway worked as songwriter, session musician and producer. Working first at Chicago's Twinight Records, he later did the arrangements for The Unifics ("Court Of Love" and "The beginning of my end") and participated in projects by The Staple Singers, Jerry Butler and Aretha Franklin, as well as with Curtis Mayfield. After becoming a "house producer" at Mayfield's label, Curtom Records, he recorded his first single in 1969, a duet with singer June Conquest called "I Thank You Baby".

Hathaway then signed to ATCO Records, which released his first single of note, "The Ghetto". His debut LP was Everything Is Everything (1970), which was critically acclaimed. His second album, Donny Hathaway, was a major hit. He also recorded an album of duets with former Howard University classmate and label mate Roberta Flack. The album was both a critical and commercial success, including the Ralph MacDonald-penned track "Where Is The Love", which proved to be not only an R&B hit, but also went Top Five on the pop charts. The album also included a number of other covers, including versions of Carole King's "You've Got a Friend" and "Baby I Love You", originally a hit for Aretha Franklin.

Hathaway followed this flurry of work with some contributions to soundtracks, along with his recording of the theme song to the TV series Maude. He also composed and conducted music for the 1972 soundtrack of the movie Come Back Charleston Blue.

In the mid-1970s he also produced albums for other artists including Cold Blood, where he expanded the musical range of lead singer Lydia Pense.

At the height of his career, Hathaway began to suffer from severe bouts of depression. It was found that he was suffering from paranoid schizophrenia and was known to have taken up to 14 pills two to three times a day to control this disease. This condition wreaked havoc on his life and led to several hospitalizations.

The effects of Hathaway's deep depression also drove a wedge into Flack and Hathaway's friendship; they did not reconcile for several years, and did not release additional music until the 1978 release of "The Closer I Get To You". The single became a pop and R&B hit, and Flack and Hathaway returned to the studios to record a second album of duets thereafter.

On January 13, 1979, Hathaway was found dead on the sidewalk in front of the Essex House in New York City, where he had been living. His body showed no signs of struggle, and the glass from the window in Hathaway's room had been removed; investigators determined Hathaway had committed suicide. Friends, fans, and the media were mystified at his death, since his career and his partnership with Flack were on an upswing. Flack was devastated by his death, and included the few duet tracks they had finished on her next album. The Reverend Jesse Jackson conducted Hathaway's funeral, which was attended by many notable people including Roberta Flack and Stevie Wonder. He was buried in Lake Charles Cemetery in Bel-Nor, Missouri.

Hathaway met his wife, Eulaulah, at Howard University. They had two daughters, Eulaulah Donyll (Lalah Hathaway) and Kenya Canelibra. Lalah has enjoyed a successful solo career, while Kenya is one of the three backing vocalists on the hit TV program American Idol.

While separated from Eulaulah, Hathaway had another daughter named Donnita Hathaway.

Legacy
Donny Hathaway Live, which featured noted R&B musicians Willie Weeks (bass guitar) and Cornell Dupree (guitar), has been cited as an influence by numerous artists including George Benson, India.Arie and Stevie Wonder, Brian McKnight, Anthony Hamilton, and Frank McComb are among the contemporary artists whose work echoes Hathaway's. His use of the Rhodes Piano on his early Atco R&B recordings has also influenced many neo soul artists & producers.

Hathaway was considered an eccentric by many. He cultivated many unusual interests, and was a devotee of mid-20th century French classical composers. Several anecdotes about Hathaway are contained in Jerry Wexler's book Rhythm And The Blues.
On soul group The Whispers' 1980 self-titled album, the group paid homage with "A Song for Donny," written by fellow soul singer CARRIE LUCAS. The song was set to the melody of Hathaway's "This Christmas."
On Jim Jones's song "Certified Gangstas", rapper The Game refers to Donny Hathaway with the lines "blowin in the crowd like Don Hathaway"
He was a major influence on the singing style of singer-guitarist George Benson.
In 2005, neo-soul singer songwriter guitarist, [artistRaul Mid?n (Blue Note) worked with Hathaway's longtime producer Arif Mardin (known for collaborations with The Bee Gees, Chaka Khan, Bette Midler, Norah Jones & Aretha Franklin) and created a tribute song to Hathaway called "Sittin' in the Middle."
Amy Winehouse refers to "Mr. Hathaway" in her song "Rehab" about depression and alcoholism. She also covered A Song for You, on her first posthumous album, Lioness: Hidden Treasures.
On NY artist Nas's album Hip Hop is Dead on the song "Blunt Ashes", he tells a story that includes reportedly claiming Donny Hathaway "freefell" from his balcony.
Hathaway's name is mentioned multiple times in rapper Common's lyrics. Also, Common's duet with Lauryn Hill entitled "Retrospect for Life" contains a sample from Hathaway's "Song for You".
In the 2001 hit by Jay-Z "Girls,Girls,Girls" Donny Hathaway's song "Love,Love,Love" is sampled.
Aaliyah covered Hathaway's single Giving up.
Rhymesayers artist Brother Ali mentions Donny Hathaway in his song, "Room With A View."
Soul Position mentions Hathaway in their song, "Hand-Me-Downs."
Talib Kweli mentions Hathaway in his song "The Beautiful Struggle"
2008, Ed Pavlic published "Winners Have Yet To Be Announced" (University of Georgia Press), poems reimagining the life of Donny Hathaway.
Bizzy Bone's song entitled ?A Song For You,? is a poignant track that includes an interpolation of Donny Hathaways's original recording of the same name.
The song "What a Catch, Donnie," from Fall Out Boy's fourth studio album, Folie a Deux, is named for him and mentions Roberta Flack, his writing partner.
In November 2008 the famous Dutch singer, Gordon Heuckeroth, made an album, called: A Song For You, with several songs by Hathaway.
Rapper Scarface mentions Hathaway in his song "Still Here" off of the "Emeritus" album released

Never My Love: The Anthology CD4

Never My Love: The Anthology CD3

Never My Love: The Anthology CD2

Never My Love: The Anthology CD1

These Songs For You, Live!

Extension Of A Man (Vinyl)