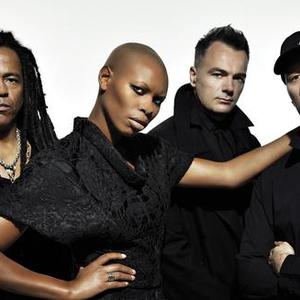 They were named after the West-African folk tales of Anansie the spider-man, with "Skunk" added to "make the name nastier". They were sometimes grouped as part of a Britrock movement, running alongside Britpop. They were labelled a "political" band, but the group has emphasized that they would prefer to be labelled simply as a "rock band". Skin herself, however, has described Skunk Anansie as a "clit-rock" group, which All Music Guide clarifies as "an amalgam of heavy metal and black feminist rage". Members Skin and Ace have mentioned the Sex Pistols, Blondie, dub music, reggae, electronica, hip-hop music and world music as significant influences.

Since the breaking up of the band, Skin has gone on to a solo career - releasing two albums: Fleshwounds, and Fake Chemical State. Ace has followed a more low-key solo career with Still Hungry, an album with collaborations with many different rock artists. Mark Richardson went on to drum for British band Feeder.

The band reformed in 2009 and following 2 'secret' gigs in London, began touring again in October. Their greatest hits album, Smashes and Trashes, was released on 2nd November 2009.

What You Do For Love (CDS)