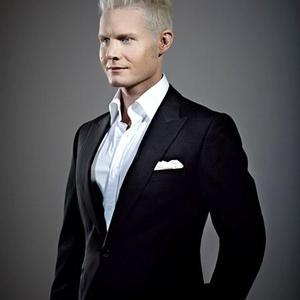 Rhydian (born 14 February 1983) is a singer from Powys, Wales, best known for his appearance on the fourth series of the British talent show The X Factor (2007) in which he came second. He was praised by all four judges throughout the series for his impressive performances, and he was the favourite to win the competition with the bookmakers. Rhydian released his self-titled debut album, 'Rhydian', on the 24th of November 2008.

Rhydian released his self-titled debut album, 'Rhydian', on the 24th of November 2008. His characteristically flamboyant interpretations of hits from musicals and beyond take up a fair amount of this release, with Rhydian even performing a duet with Broadway legend Idina Menzel on 'What If'.

He released his second album, O Fortuna, on the 30th of November 2009 which was subsequently nominated for a Classic Brit Award. Two further albums, Waves (new wave pop) & Welsh Songs followed in 2011. Rhydian has hosted his own TV series on S4C television and has starred in the touring musicals, The War of the Worlds, We Will Rock You and Grease. Work on a fifth album is ongoing and he will tour in the spring of 2013