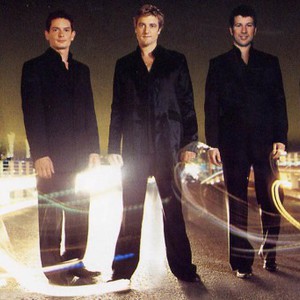 Amici Forever is a group of young opera singers who combine conventional opera and the new pop opera (operatic pop). They are composed of two sopranos, one tenor, and one baritone: Lucy van Gasse, Tsakane Valentine, David Habbin and Bruno Santino, respectively. The original group first met while rehearsing and performing at different opera venues globally. The band originates in the United Kingdom and was formed in 2002.

The original group first met while rehearsing and performing at different opera venues globally. The band originates in the United Kingdom and was formed in 2002. The original five members included Tsakane and David, but were also Nick Garrett (bass-baritone), Geoff Sewell (tenor), and Jo Appleby (soprano). Nick left the band in 2005 shortly after the release of their album Defined for unexplained reasons. Geoff left in February 2006 right after his daughter was diagnosed with ASD (autism spectrum disorder) and was replaced with Bruno. Jo Appleby was replaced by Lucy when she left in late 2006 to pursue a solo career.

Amici was then signed with Arista Records and came out with their first album in 2004, The Opera Band. The album quickly reached #74 in the Billboard 200 album charts and top 50 of the ARIA Australian album charts. It reached #2 on the Billboard Classical Crossover and Heatseeker charts, #1 on the ARIA Australian Classical album chart, and it also became top 5 on the UK Classical charts. In addition, it received a nomination for 'Album of the Year' at the Classical Brit Awards in 2004, where they also performed.

The latest album from Amici is Defined and was released in 2005. This album has reached top 5 of the Australian album charts.

Photographs and individual bios can be found at Amici's official website, www.AmiciForever.com.