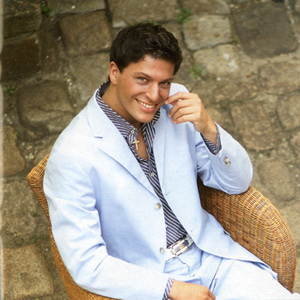 Patrizio Buanne grew up wanting to continue the tradition of being an Italian chef just like his father, who has first brought pizza from Napoli to Vienna in the late 60's. But it was his father Franco Buanne himself that said that he would probably chop his hands off- if he did. His parents didn't want that kind of life for their son, to work always evenings six days a week. Being brought up listening to the old vinyl records that his parents recorded on tapes to be later played in the restaurant...

Being brought up listening to the old vinyl records that his parents recorded on tapes to be later played in the restaurant, Buanne got caught several times already at the age of 4 years singing along loudly to the music. When he was eight years old, Buanne received his first guitar, and at age eleven made his first public performance. Ever since he participated in talent contests and won countless singing competitions.
At the age of seventeen, Buanne performed at a religious convention for Pope John Paul II and a crowd of 85,000. This successful performance enabled him to sign his first recording contract.
In 1996 his father died from virulent cancer, and the grief ate away at him so much that he almost lost his own life to a perforated ulcer.
Buanne's mother Alina, brought him up alone supporting his talent but making sure he would finish school education and have a profession. After his graduation 1999 Buanne decided at the age of twenty, to move back to Italy from Austria and study languages as well as to develop his contacts in the entertainment industry.

The Multi-talent
Buanne speaks from an early age six languages: Italian, German, English, French, Spanish, and Polish, and can say a few words in many other tongues. In his early twenties Buanne appeared as a performer and co-host on several television shows and recorded several voice-overs and title tracks for cartoons. One of such called "Bu bu-cha cha" as seen on the Italian national channel RAI. This gave him the title of being simply a ?showman?. However, he wanted more - to pursue his one true passion, to sing and to be a recording artist. Investing his wages into producing his own records and touring with his band, were the beginnings.

?The Italian?
When he was twenty-five he started to search for a producer who would put his big dream into realty, and record Buanne?s most favorite Italian songs that he was brought up ?on one album. To pay tribute to his father. In Christian Seitz he has found a great fan, friend, supporter, and producer. After eighteen months of hard work an album of 14 romantic Italian songs recorded at the Abbey Road Studios (made famous by The Beatles) in London, accompanied by the Royal Philharmonic Orchestra got signed by Universal music UK and his singing career took off with the launch of his first international album, called The Italian, which was released in the United Kindgom on February 28, 2005, and in the United States on March 7, 2006. It reached number ten on the pop chart in the United Kingdom, where it attained platinum status; it was also certified as platinum in South Africa, Asia, and New Zealand, and as triple platinum in Australia.
Following The Italian's release, Buanne performed two sets of sell-out tour dates in 2006 with a six week tour of major theatres and concert venues such as at the legendary Sydney Opera House, the Apollo theatre in London, the Esplanade in Singapore?. In October 2006 he performed at the prestigious NIAF gala in Washington, D.C. in front of American President George W. Bush. Following his performance was broadcasted on the American public television channel PBS and broke records at PBS stations across the United States. This lead by huge demand to a six week tour of major theatres such as the Kennedy centre in Washington, the Lincoln centre in NY, the Benedum in Pittsburgh and the Chicago theatre,?.

?Forever Begins Tonight?
Buanne's second album, Forever Begins Tonight, was now first released in South Africa in July 2006 to coincide with a tour at the end of that month. The album was then released in the United Kingdom on October 16, 2006, and in the United States on April 24, 2007.
Forever Begins Tonight a ?Volume 2? of the mega seller and debut album The Italian includes besides more standards from the Italian songbook recorded with Europe's finest musicians, original material and an Italian version of Robbie Williams's song "Angels." Which caused quite a stir in the British media. Buanne is the only artist ever to be allowed to record the song in another language. "I liked the idea of taking a famous pop song and interpreting it in my way, giving it the Italian touch. It was a very nice gesture of Robbie's," said Buanne, when telling of the near-miss they had for recording the song. At first, Williams's "people" would not allow him to record the song. However, when Williams heard Buanne's rendition of "Angels," and became aware of his brilliant interpretation, Williams gave the go-ahead to record it. The new Italian version is called "Un Angelo."
Buanne also recorded the football anthem "Stand Up! (Champions Theme)" that was played at the end of all matches in the 2006 FIFA World Cup in Germany. The song is an orchestral remix of the original Village People song "Go West" made popular by the British duo Pet Shop Boys. The song is available on a special UK edition of Forever Begins Tonight.
In mid 2007 an enhanced edition of Forever Begins Tonight was released called "The Tour Edition." This edition includes not only the tracks on the original CD, but also a bonus DVD of a live concert in Holland plus music videos to some of the songs. (These music videos were earlier seen in advertisements and promotional showings on television all over the world.) Due to the great responds and demand in the US market, Buanne has decided to develop deeper business relations with the US music industry which have resulted that one of the biggest music managers, Mr. Jim Morey (Mariah Carey, Michael Jackson, Neil Diamond, Macy Grey, Dolly Parton, Hanna Montana?) has been convinced and approached by his talent and unique style to work on the next step in his career.

"Inspirations"
Those artists who became icons share not only a divine charisma, they share tragedy. Bono, Elvis, John Lennon and Madonna all lost a parent very young. It's as if that loss made them reach out in their voice to touch the world and that is in there with Patrizio Buanne, as well.
Patrizio has been called so far ?the voice of romance? but his creamy baritone voice, seductive phrasing and persona on stage says a whole lot more.
Buanne says, "I promised my father I would make my name - his name - famous. That's why I'm doing what I'm doing. Every time I would sing, I would close my eyes and I saw my father; and every time I was singing it brought me nearer to him. I wanted to sing myself free. Empty the pain and share the beauty of the culture I was brought up. It's important for me to sing the songs I was brought up and songs that I can personal relate to. Music was always like tonic for my soul."
Inspirited from a childhood immersed in the music of those Italian pop singers like Sergio Bruni, Massimo Ranieri, Adriano Celentano and American singers like Dean Martin, Frank Sinatra, Elvis Presley, Roy Orbison or Tom Jones he has created a combination of elegance, manners, retro ?Italian gentlemen class? combined with a new young energy, cheekiness and fun energy.
Basically he has taken an essence from these all time favourite entertainers and re-invented that tradition. New school crooner, entertainer. Or simply call it: PATRIZIO