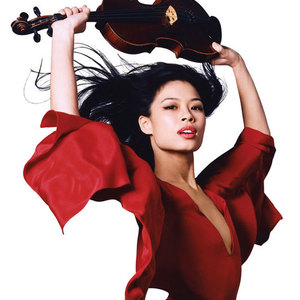 Vanessa-Mae Vanakorn Nicholson (born October 27, 1978 in Singapore, currently lives in United Kingdom), known on stage as Vanessa-Mae (in Chinese: ??, Ch?n M?i) is an internationally known British pop and classical musician, especially noted for her violin skills. Her music style is self-described as "violin techno-acoustic fusion" as several of her albums prominently feature the techno style. Vanessa-Mae was born in Singapore to a Thai father (Varaprong Vanakorn) and a Chinese mother (Pamela Tan).

Vanessa-Mae was born in Singapore to a Thai father (Varaprong Vanakorn) and a Chinese mother (Pamela Tan). After her parents separated, her mother married Englishman Graham Nicholson, and the family moved to England when Vanessa-Mae was four years old. She grew up in London and is a British citizen.

Vanessa-Mae began playing piano at the age of three and violin at five. She was relatively famous in the United Kingdom throughout her childhood making regular appearances on television (for example on "Blue Peter") mostly involving classical music and conservative style. According to Guinness World Records, she is the youngest soloist to record both the Ludwig van Beethoven and Pyotr Ilyich Tchaikovsky violin concertos, a feat she accomplished at the age of thirteen. During this time she attended the Francis Holland School in central London.

Vanessa-Mae made her international professional debut at the Schleswig-Holstein Musik Festival in Germany in 1988, and also during 1988 made her concerto debut on stage with the Philharmonia Orchestra in London.

On entering adolescence Vanessa-Mae broke away from her traditional classical influences and became known for her flashy, sexy style appearing in music videos in stylish outfits. She appeared on the Janet Jackson album The Velvet Rope playing a violin solo on the song "Velvet Rope". Her first pop-style album, The Violin Player, was released in 1995, and is still regarded as one of the best works of her career.

In April 2006, Vanessa-Mae was ranked as the wealthiest young entertainer under 30 in the UK in the Sunday Times Rich List 2006, having an estimated fortune of about ?32 million ($64 million) stemming from concerts and record sales of over an estimated 10 million copies worldwide, which is an unprecedented achievement for a young female violinist.

Vanessa-Mae most often uses one of two types of violins, a Guadagnini acoustic violin or a Zeta Jazz model electric violin. The Guadagnini was made in 1761, and was purchased by her parents at an auction for ?150,000. It was stolen in January 1995, but was recovered by the police two months later. She once fell and broke it, but it was repaired. It is currently valued at almost $500,000. In addition, she uses one of two Zeta Jazz Model electric violins, one of which is white and the other one of which features decals of the United States flag. In addition to these two main violins, she sometimes buys violins and resells them later, giving the proceeds to charity.

The Best Of Vanessa Mae

The Original Four Seasons And The Devil's Trill Sonata