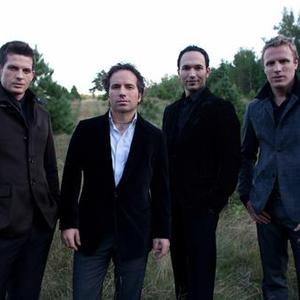 The Canadian Tenors' music is an eclectic blend of classical and contemporary pop that is thrilling audiences of all ages. The Tenors are the incredibly powerful voices of four gifted young men with diverse vocal styles, undeniable charm, international solo success and are one of Canada's most sought-after exports. This vocal sensation's debut album has gone gold in Canada and is being released around the world by Universal Music and its affiliates.

This vocal sensation's debut album has gone gold in Canada and is being released around the world by Universal Music and its affiliates. The music of Port McNeil's Clifton Murray, Toronto's Victor Micallef, Ottawa's Remigio Pereira and Vancouver's Fraser Walters is rich and soulful with powerful anthems and the most beautiful melodies. Originally founded by Jill Ann Siemens, The Canadian Tenors' unique repertoire is sung not only in English and French but also in Spanish and Italian reflecting their multicultural heritage and establishing the group internationally. The talented singers collaborated with world-renowned producers Quiz and Larossi in Sweden (Il Divo), Grammy Award-winner Steve Thompson (Madonna) and Juno Award winner Jeff Wolpert (Loreena McKennitt) for their self-titled debut album. The critics and audiences have agreed that this first album is a memorable hit that features a repertoire of classic songs along with romantic operatic arrangements such as their haunting and anthemic version of the well loved Adagio and the extraordinary sensation Because We Believe, composed by David Foster, Amy Skyla Foster-Gillies and Andrea Bocelli.

The Canadian Tenors have criss-crossed the globe thrilling millions of music lovers with their magical voices, their wonderful sense of humor, and their memorable music. The foursome have received rave reviews and standing ovations around the world from the Tel Aviv Opera house where they shared the stage with Andrea Bocelli to Las Vegas' Mandalay Bay Coliseum with David Foster and Friends to Toronto's Air Canada Centre where they headlined at ONE NIGHT LIVE with STING and Sheryl Crow.

From performing opening songs for President Bill Clinton, Prime Minister Tony Blair and President Shimon Peres to making musical memories at events with icons such as John Legend, Wyclef Jean and of course Canada's musical maestro David Foster the Canadian Tenors' reputation is that of talented singers and genuine artists with big hearts. They dazzled audiences in a cross-country tour of Holland. The Tenors also performed for thousands in London's Trafalgar Square on Canada day in 2008 andon Parliament Hill in Ottawa with Sarah McLachlan in 2009. They have thrilled the likes of HRH Prince Edward and Princess Sophia and so many others in intimate settings and locations from Tahiti to Bermuda to Vienna.

The Canadian Tenors have raised their voices to passionately support many children's charities. They recently filmed a documentary in Africa, where their voices were united with local children's to bring awareness of the village of Bulembu, Swaziland, a town being reborn after years of suffering. They shared the stage with Matt Damon and Ben Affleck helping children at the ONEXONE galas and performed for 10,000 cheering youth at Free The Children's amazing ?Me to We Day?.

They performed at Bryant Park's Christmas Tree lighting in New York City on CBS Television and will star in the CBC's Holiday Festival On Ice (singing ? as their skating still needs work). They are launching a 70 city tour of the United States including dates with David Foster and releasing their second album, a Christmas Album. The Tenors have been named the Canadian Ambassadors for the 2015 Pam Am Games Toronto Bid.