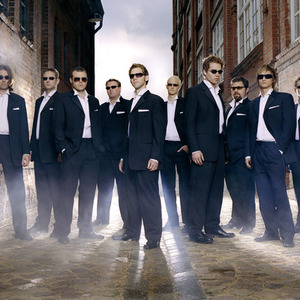 The Ten Tenors formed while the members were pursuing opera studies at University during the mid-90s. After performing at corporate galas through their university days, in their final year at the Conservatorium, The Ten Tenors finally did what they'd always joked about ? they created a show full of laughs, fun, cheeky camaraderie, and most incredibly, truly beautiful music and they hit the road. It was a risk, since they were self-funded and were absent without leave from the Opera School; clearly it was a risk that paid off.

The thing they were ?onto' kept growing and growing, with relentless touring through the Australian outback honing the group's skills, in music and comedy.

?It's an unusual combination of voices, traditionally speaking,? says Shannon Brown, the group's Musical Director, ?which is what makes the group so unique. We find the challenge of balancing opposing musical and performance elements very exciting!?

Clearly their audiences do too! Since launching themselves onto the international platform at the Eurovision Grand Prix Germany 2002, The Ten Tenors have enjoyed a relentless touring schedule, which has seen them enjoy sold-out performances in Europe, the United States, Canada, Asia, and Australia. They rarely take a break! Simultaneously they've released gold and platinum-selling albums and dvds, including their latest ? Here's to the Heroes which features the music of Oscar-winning film composer, John Barry, who was also Executive Producer of the album.

Highlights of The Ten Tenors' career include: sellout shows in Australia, Asia Europe and North America; an appearance on the red carpet for the 57th Annual Prime Time Emmy Awards and later at the Governor's Ball, and recording their Here's to the Heroes at London's famous Abbey Road Studios.

Wish You Were Here

Heres To The Heroes

One Is Not Enough