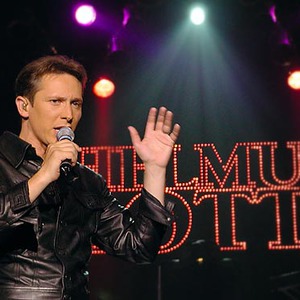 Helmut Lotti (born October 22, 1969 as Helmut Lotigiers) is a Belgian popular singer. He began his singing career with a visual and singing style in an obvious imitation of Elvis Presley, and was described as "De Nieuwe Elvis" (in Dutch) or "The New Elvis". His first two albums were Vlaamse Nachten (i.e. Flemish Nights, 1990) and Alles Wat Ik Voel (i.e. All That I Feel, 1992). After a few more albums, he changed direction in 1995 with the first of what became a long series of "Helmet Lotti Goes Classic" albums, with proved to increase his popularity.

The Goes Classic albums lost their numerical denominators, and were retitled,Goes Classic The Red Album,
Goes Classic The Blue album and Goes Classic The Castle Album, respectivley. The other titles are still in effect.
The above discography is for the European issues. The International versions are some what more muddeld and confusing.

Oddly enough the majority of his discography is availble on DVD except The Final Edition, which thus far has only been issued on VHS.
The DVD of Goes Classic The Red Album, is a new concert shot in Brussels in 2003, omitting 2 songs from the orginal 1995 version. The majority (40 minutes) of the orginal 60 minute, 1995 concert shot in Antwerp, is included with this version, omittting 6 songs.
the other goes classic dvd's are direct transfers of the orginals issued on vhs
He does volunteer work as an ambassador for UNICEF. Lotti has vowed to take part in the 0110 concerts against racism and extreme right, organised by Tom Barman.

A Classical Christmas With Helmut Lotti

My Tribute To The King