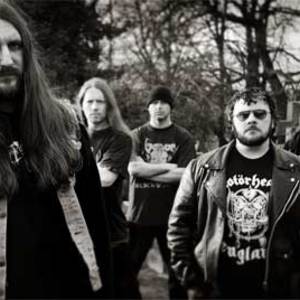 Ravens Creed was formed in late 2006 by Steve Watson (ex IRON MONKEY/CEREBRAL FIX/CONSUMED/HELVIS/DESECRATOR) and Jay Graham (ex-UNDERGROOVE/SKYCLAD/RETURN TO THE SABBAT and former session drummer for TONY IOMMI). The pair locked themselves away in their own TENKO studios and wrote and recorded over 20 songs, dismayed at the local scene and lack of like-minded individuals to take the task to the live arena...

Shortly after the Albion Thunder tour was completed the band played several festivals, Ravens Creed performed at the UK's premier extreme metal festival, Bloodstock, in August 2008.
Ravens Creed released the debut album 'Albion Thunder' through Doomentia Records in the Spring of 2009.
The lp recieved fantastic reviews from not only the underground, but from mags like Kerrang! and Metal Hammer (who put Albion Thunder in top 100 albums of 2009). Due to having no time to commit to the band vocalist Ben Ward stepped down early February 2010, Hydrophonic records recently issued a split seven inch with Ravens Creed and Sollubi in February 2010 (five witches of nine/hearse fokker with Ward on vocals, which was recorded in 2007 at the bands TENKO studios.
The band recruited Al Osta on vocals in 2010 and released a 7" EP entitled 'Nestless and Wild' in 2011. Appearances at High Voltage Festival and Fenriz curated Live Evil Festival followed, the band are due to release their second album 'The Power', in spring 2011.

Get Killed Or Try Dying