Man Is The Bastard 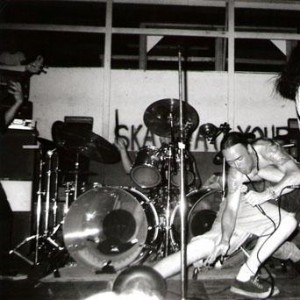 Man is the Bastard were a pioneering hardcore punk band who contributed the name, and perhaps also the ethos, to the punk subgenre known as powerviolence. Based in Claremont, California, the band existed from 1991 to 1997, releasing many vinyl records on DIY-punk labels from around the world. In stark contrast to other punk musicians, MITB made the move of displacing the electric guitar from its long reign as the primary instrument of punk aggression.

In stark contrast to other punk musicians, MITB made the move of displacing the electric guitar from its long reign as the primary instrument of punk aggression. In turn, they made room within their revolutionary spirit for progressive bass chords and scales, for industrial noise (field recordings and power electronics), and for member Henry Barnes' ?Amps for Christ? and homemade guitar reconfigurations.

The bass-heavy configuration was found in earlier projects by founding members Joel Connel and Eric Wood, who recorded under such monikers as Cyclops and Neanderthal. Their thematic emphasis on the primitive and mythological would continue in MITB records such as ?Sum of the Men? and the split album with Bleeding Rectum. The fullest expression of these concerns appeared with the 7? record entitled ?Backward Species,? which combined an almost anthropological/New Historicist approach to humanity's violent practices. Songs such as ?Kuro Treatment? and ?Heretic's Fork? are exemplary.

But their lyrical violence was balanced by their adamant avocation of progressive ideals. Animal rights, vegetarianism, the decriminalization of marijuana, the putrid legacy of American foreign policy, the encroaching police state ? the list goes on, but above all, the band was concerned with raising consciousness. This record of political activism resulted in their most widely available album, 1997's split LP with political prisoner Mumia Abu-Jamal.

In addition, MITB exist as a nucleus around which many prominent bands can be traced within a recognizable lineage: Pillsbury Hardcore, Peace Corpse, Pissed Happy Children, Neanderthal, Infest, No Comment, Loomis Slovak, Atavism of Twilight, Sleestak, Buckethead, The Locust, Bastard Noise, Born Against, Djam Karet etc. ? this is just a partial list of individuals tied to MITB.

In the years since, MITB has splintered off into several working factions. Wood occasionally performs in the Los Angeles area as Bastard Noise. Kenyon and Connel have soldiered on in progressive rock acts such as Controlling Hand and Lux Nova Umbra Est. Perhaps the biggest surprise is Barnes' Amps for Christ, which has blossomed into a highly regarded folk/noise hybrid.

The band's willingness to sublimate political concerns into a harsh and unique aesthetic is sorely missed. For example, during the first Gulf War, they had the courage to feature cover art depicting Saddam Hussein being sodomized by George H.W. Bush.