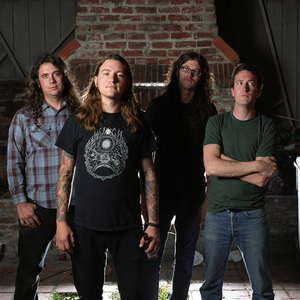 Saviours are an explosive, unbridled force. Possessing an extraordinary songwriting sense, lion-hearted innovation, world class technical ability and a bottomless pool of raw talent and creativity, Saviours are one of creative heavy music's most exciting new bands. Fast becoming known as one of the best contemporary metal bands on the planet today, Saviours deliver sensational heavy music with a latent punk energy that merges scorched-earth aggression and multidirectional riff odysseys with a mean d-beat pummel and Mot?rhead-like locomotive roar.

Fast becoming known as one of the best contemporary metal bands on the planet today, Saviours deliver sensational heavy music with a latent punk energy that merges scorched-earth aggression and multidirectional riff odysseys with a mean d-beat pummel and Mot?rhead-like locomotive roar. The red hot band has been on a fast rise since its formation in 2002 and has electrified stages the world over, touring alongside peers such as Kylesa, The Sword and Mastodon as well as with legends such as Saint Vitus and High on Fire; each who have given their stamp of approval to Saviours' roaring, electric sound and power.

Formed in 2004, Oakland, California's Saviours are the end product of a "vision-quest" by guitarist / vocalist Austin Barber and drummer Scott Batiste. An ipecac reaction to the current state of heavy music, they aimed to assemble an epically heavy, crushingly loud band that would reinvigorate their love for excessive volume.

Saviours' new album Accelerated Living, has met to shining fan and critical acclaim. Recorded at San Francisco's Lucky Cat Recording Studios with Producer Phil Manley (of Trans Am / The Fucking Champs), the record is a veritable heavy metal riff-fest, blending mind-bending guitar work and locomotive rhythms with a wild-ride heaviness that is both incredibly infectious and unconditionally unique. Accelerated Living has tabbed as ?a fitting paean to the holy unholiness of hard rock? that ?finds the foursome in meaner, leaner, riff-ravaging form than ever? by Blurt.

In 2009, the celebrated Oakland, CA metal band was bestowed with a ?Goldie Award? by the San Francisco Bay Guardian as part of the alt-weekly's 21 st annual ?Guardian Outstanding Local Discovery? Awards. The Guardian gives the "Goldie Award" annually ?to honor outstanding talent in the performing and visual arts saluting promising artists early in their careers as well as established artists deserving special recognition.? Saviours were presented with the award at a private ceremony in San Francisco last November.

Saviours continue to tour relentlessly, bringing their commanding live show to stages across the globe. Known for their refreshing take on the classic metal of decades past, Saviours have rapidly become frontrunners in today's thriving heavy metal underworld, spewing vocal wildfire over an endless arsenal of harmonized guitars and D-beat rhythms.