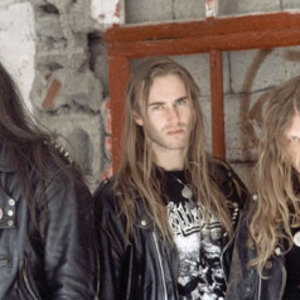 Destr?yer 666 are an Australian blackened thrash/death metal band formed in 1994 by guitarist K.K. Warslut, following his departure from the cult black metal band Bestial Warlust. Originally formed and located in Melbourne, Australia, the band now base themselves in Eindhoven, the Netherlands. To date, they have released four studio albums, the most recent being 'Defiance' in 2009. Their sound can be described as a blend between black, thrash and death metal, although in recent releases, the band's death metal edge has become more prominent.

Their sound can be described as a blend between black, thrash and death metal, although in recent releases, the band's death metal edge has become more prominent. For example, the album 'Unchain the Wolves', considered to be their finest by many fans, has a less head-on and aggressive sound than later albums such as 'Cold Steel... for an Iron Age', which uses a more bombastic and hard-hitting tone. Their latest album, 'Defiance', was released on June 22nd 2009 through Season of Mist records.

Warslut formed the band following his departure from the cult black metal band Bestial Warlust. The project was a solo venture at first but eventually evolved into a proper band. The group's debut EP, "Violence is the Prince of this World," featured Warslut on guitar, bass and vocals, with Matt Skitz from Damaged and Criss Volcano from Abominator on drums. The song "The Eternal Glory of War" was later re-recorded for the album 'Phoenix Rising').

Following this release, Destr?yer 666 got a full line-up that included bassist Bullet Eater (aka Phil Gresik, ex-Bestial Warlust, Hobbs' Angel of Death and Mass Confusion), Gospel of the Horns drummer Howitzer and guitarist Shrapnel. With these members the band recorded its first album, 'Unchain the Wolves'. Following this Howitzer was replaced by Deceiver and during 1999 Destr?yer 666 recorded 'Phoenix Rising', though it was not released for more than a year.

During 2000, the band toured Europe extensively. Dutch drummer Erich de Windt of Sinister and Prostitute Disfigurement joined the band after the recording of the EP "King of Kings". Gresik left to be replaced by Simon Berserker. 'Phoenix Rising' was released by Season of Mist in November. De Windt was replaced by German drummer Mersus in 2001 and Destr?yer 666 toured through Europe again with Immolation and Deranged, after which the band left Australia for good. Warslut settled in Eindhoven in the Netherlands and Shrapnel began living in London.

The 2002 album 'Cold Steel... For an Iron Age' featured cover art, which the band has since disavowed, claiming they never approved it. A reissue of the album was scheduled for late 2005 but as of May 2009, this has still not come to light. It is supposed to feature all new artwork as well as bonus songs. The group is also working on a new LP containing all of the songs previously released only on 7" vinyl EPs.

Call Of The Wild (EP)

Cold Steel... For An Iron Age

Cold Steel for an Iron Age

Violence Is The Prince Of This World