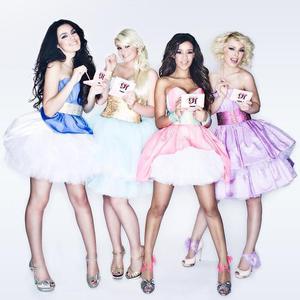 Queensberry is a German girl group, formed in December 2008 during the 7th season of German version of "Popstars" TV show. The original line-up composed of singers Leonore Bartsch ('Leo'), Gabriella De Almeida Rinne ('Gabby'), Antonella Trapani ('Anto'), and Victoria Ulbrich ('Vicky'). On July 7, It was announced that both Anto & Vici had left the group.and have been replaced by Selina Herrero and Ronja Hilbig

Their debut album "Volume I" (RD: December 12, 2008) reached gold status in Germany. It produced their first single "No Smoke" and "I Can't Stop Feeling" (RD: February 20, 2009). "Too young" (Bonus track of "Volume I - Deluxe Edition" from June 26, 2009) did chart position #5 in Germany.
In May 2009 Queensberry did start to work on their 2nd studio album, "On My Own". The 2nd album's release date was November 6, 2009, with the promotional single "Hello (Turn Your Radio On)" released October 23, 2009. In early 2009 Queensberry served as an opening act for "Pussycat Doll's World Domination Tour" in Germany and some European countries.
On 7 July 2010, the group announced on its website that Anto and Vici had both departed from the group. Selina Herrero, a German-Spanish singer, who first hit the German single charts in 2008 with 'Don't Be Shy' and 'You Can't Stop Me', and Ronja Hilbig, a singer from Hamburg, were brought in as new members.
The first appearance of the new quartet was scheduled for 15 July 2010 on VIVA Live. In October 2010, the group recorded its earlier single 'I Can't Stop Feeling' in Spanish as 'Yo No Puedo Vivir Sin Ti'.
On December 3, 2010 Queensberry announced a label change. During spring and summer of 2011, the group performed throughout Germany on their Pink Chocolate Tour.
In April 2012 it was announced that Selina Herrero left the band, as well that the first single from the upcoming album, 'Timeless', was released on June 1, 2012, the album 'Chapter 3' on June 22, 2012.