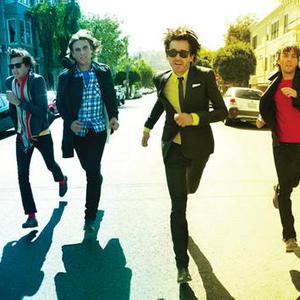 There have been a number of artists going by the name of Phoenix (1) A popular French alternative rock band (2) A Romanian folk rock band (3) A short-lived British hard rock band (4) A UK-based filk band (5) A goa project (6) A rac band with members from France and Sweden. (7) A hungarian rock band (8) A hungarian rapper (9) An Oklahoma City garage-soul band from the late 1960s/early 1970s (10) A Japanese pop group from the 60s. (11) A British rapper Phoenix (1)

Phoenix (1)
The French band comprises Thomas Mars (vocals), Deck D'Arcy (bass), Christian Mazzalai (guitar) and Laurent Brancowitz (guitar), who started playing music as kids in a suburb of Versailles during the same cultural period that produced late-'90s bands such as Air,Mellow and Daft Punk. The band's lineup has no permanent drummer or keyboardist.

Phoenix formed in 1999 and started off as the backing band for a remix of Air's ?Kelly Watch the Stars? single. Soon after, Phoenix released their debut album United in 2000. The name "Phoenix" was officially chosen in 1996 when Laurent Brancowitz permanently joined Pheonix after his other band Darlin' disbanded. The other two members of Darlin' (Thomas Bangalter and Guy-Manuel de Homem-Christo) went on to form Daft Punk.

Phoenix are based in Paris, France and their music has been featured in such films as Shallow Hal and Lost In Translation. In 2006 the band themselves appeared Marie Antoinette, which like Lost In Translation, was directed by Sofia Coppola, Thomas Mars' partner.

The band's fourth album, "Wolfgang Amadeus Phoenix" was released in 2009. It contains "1901", which peaked at #1 on the Billboard Alternative Songs chart in January 2010. The album won for Best Alternative Album at the 52nd Annual GRAMMY Awards.

Phoenix (2)
A Romanian folk rock / rock band, who has experimented across the years with many musical genres, having a rich musical history that can easily be compared to that of the Beatles. Starting with the rock'n'roll of the Beat Generation, they continued enriching their sound with blues influences, jazz, psychedelic, krautrock, culminating with the orientation towards Romanian folk music, which they blended harmoniously with the sound that was popular in the '70s

Phoenix is one of the most prominent Romanian Rock and Roll bands of the latest decades, and also the first one to take musical inspiration from ancient Romanian folk themes.

Phoenix was launched in the cosmopolitan city of Timi?oara in 1962 by a pair of schoolboys: Nicu Covaci and B?la Kamocsa, under the name of Sfin?ii (The Saints). In their first years, together with Florin ?Moni? Bordeianu (born 1948), they performed in school contests and at local clubs, covering Western music hits from The Rolling Stones, The Beatles, The Who, etc., and they quickly became very popular amongst the youth. In 1965 the Communist authorities demanded that the band stop performing under the name The Saints, because of the religious innuendo that the name carried. Forced to comply, the band took the name Phoenix. Nicu Covaci also changed the composition of the band, around 1963, by adding Claudiu Rotaru, Ioan ?Pilu? ?tefanovici (born 1946) and G?nther ?Spitzly? Reininger (born 1950) to the lineup.

In 1965 they had their first big concert in Bucharest. Their performance brought a collaboration with Cornel Chiriac to record some of their songs. The first songs they recorded were ??tiu c? m? iubesti ?i tu? (?I Know You Love Me Too?), ?Dun?re, Dun?re? (?Danube, Danube?) and ?Bun e vinul ghiurghiuliu? (?Good is the Red Wine?). The same year also marked the beginning of their collaboration with Victor C?rcu, who went on to write many of their most famous songs, such as ?Vremuri? (?Old Times?), ??i totu?i ca voi sunt? (?And Yet I Am Like You?), ?Nebunul cu ochii ?nchi?i? (?Crazy Man with closed eyes?), ?Floarea st?ncilor? (?Mountain Flower?) and ?Canarul? (?Canary?).

In December 1967 Phoenix had their first major series of concerts in many western cities, capped off by two huge concerts in Timi?oara. After winning a few prizes in national students' contests, held at Ia?i the following year, in 1968 they recorded their first EP, Vremuri (Old Times), containing two original songs, Vremuri and Canarul (The Canary), and two covers (Lady Madonna - The Beatles and Friday on my Mind - Easybeats). A second EP would follow one year later, named Floarea st?ncilor (The Flower of the Rocks), with all four songs being original compositions. Both albums sport a sound reminiscent of the beat style popular in that era.

They then started working on a rock theater play ?Omul 36/80? (The Man 36/80) which won several prizes for originality.

In 1969 Ioan ?Pilu? ?tefanovici was replaced by Dorel ?Baba? Vintil? Zaharia (born 1943). For the next year the band became more and more popular, frequently visiting Bucharest and being invited in talk shows about music.

In 1970, Moni Bordeianu emigrated to the US, and, for a brief period of time the band suspended its activity, also due to total censorship that followed a protesting speech held by Bordeianu in his last concert. 1970 meant the blues period of the band. The formula used was Nicu Covaci - guitar, G?nther ?Spitzly? Reininger - piano and voice, Zoltan Covacs - bass guitar and Liviu Butoi - oboe and flute. Phoenix was born again the next year, with Covaci, Josef Kappl, Mircea Baniciu, Costin Petrescu (replaced in 1974 by Ovidiu Lipan, nicknamed ???nd?ric??) and Valeriu Sepi.

But the Communist officials were not very comfortable with the Western-style music that they were singing, and kept creating them problems. So Phoenix abandoned beat turned to Romanian folklore, pagan rituals, mystic animals and old traditions. In this same year, Phoenix started a collaboration with the Institute of Ethnography and Folklore and the Folklore section of Timi?oara University on an ambitious project, a rock poem that combined traditional wooden instruments with modern sounds. During this project the band also started collaborating with Valeriu Sepi (born 1947), who eventually joined the band. The first outcome would be the 1972 LP Cei ce ne-au dat nume (Those Who Gave Us Our Names) - the first LP to be recorded in Romania by a Romanian band. Two years later, Mugur de fluier (Flute Bud) followed. Both albums underwent severe censorship.

In 1973 Phoenix represented Romania at the ?Golden harp? festival in Bratislava (Slovakia) and then in the ?Disc festival? in Sopot (Poland). Also, they wanted to record a new rock-opera, named ?Me?terul Manole?, but the communist officials censored it all, by ?losing? the unique book with costume sketches and lyrics given to them for official approval. The result was only a EP with an extract from the opera, Me?terul Manole, uvertur? (Me?terul Manole, uverture) and two older songs, Mam?, Mam? (Mother, Mother) and Te ?ntreb pe tine, soare? (I'm asking you, sun?).

On Monday, 19 November 1973, Phoenix held a memorable concert in Bucharest, presenting their new hits ?Andri Popa?, ?Pavel Chinezu? and ?Strunga?, which composed the new disc ?Mugur de fluier?. The new songs were still influenced by folklore yet had a new style. This style was the result of the collaboration with new songwriters Andrei Ujic? and ?erban Foar??. Based on those new songs Nicu Covaci created a new show ?Introducere la un concert despre muzica veche la rom?ni? (?Introduction to a concert about old Romanian music?) in which he introduced violins, flutes, archaic percussion and other traditional instruments. The show was never finished due to a new collaboration with ?Cenaclul Flac?ra.? This period is considered the peak for Phoenix. Their sound was considered original and powerful and full stadiums were common for their concerts.

Every winter the members of the band would retreat to Mount Semenic and plan their upcoming songs. That winter the show ?Zoosophia?, a title that would later change to ?Cantafabule?, was created. The show began by ?calling? all mythic animals and continued by dedicating a song to each of them, finishing with the Phoenix, the band's symbol. The year 1975 brought a newcomer to the band, Ovidiu Lipan ???nd?ric?? (born 1953). The ?Cantafabule? show was first presented in Timi?oara in February 1975. The disc was recorded in a very short time and was published the same year with a misspelling in the title: ?Cantofabule.? What followed were two years of almost continuous concerts but also the creation of the soundtrack for the movie ?Nemuritorii?.

By this time, the popularity of Phoenix had grown huge; people loved their songs not only for what they were, but also because they contained thinly-veiled allusions to the Communist regime. The band members, especially Nicu Covaci, found themselves increasingly harassed by the Securitate. Covaci married a Dutch woman and left the country in 1976. He returned in 1977, bringing in relief aid for those struck by the powerful earthquake on March 4. After two grandiose concerts in Constan?a and Tulcea, Covaci surprisingly left the country again, this time with all the band members (except Baniciu) hidden inside their Marshall speakers - a huge undertaking, since in Communist Romania it was extremely difficult to obtain approval to travel abroad, and illegal border crossing was punished with imprisonment.

After arriving in Germany, Phoenix disbanded. Kappl and a few others (Erlend Krauser, Ovidiu Lipan) formed a new band, Madhouse and released a not very successful album named From The East. In 1981, Covaci co-opted Neumann and Lipan and English bassist Tom Buggie, who had an amazing technical playing ability, under the name Transsylvania Phoenix (since a band named Phoenix already existed) and released an LP named Transsylvania, containing two old Phoenix songs translated into English to target the Western audience and five new ones. Covaci together with Kappl also released two EPs and one maxi single as Transsylvania-Phoenix.

In 1990 Phoenix made a triumphant comeback to Romania, with a highly emotional concert in their hometown Timi?oara, the city that sparked the popular revolt in December 1989 that eventually led to the downfall of the Communist regime. In the following years, Phoenix toured a lot and released a few compilations of their older recordings. Internal frictions, especially between Covaci and Baniciu, were making headlines in the media.

A new album appeared in 2000, the first original album after their 1990 comeback; with the exception of Covaci, the lineup comprised none of the members from the '70s.

In 2002, the 40th Anniversary of the band brought together almost all former members in a supershow.

At the end of 2005 the band (in its classic gold lineup) released a new album, named Baba Novak.

As of 2008, the band still performs at live events.

Phoenix (5)
Phoenix is also a Classic goa / psychedelic trance project with some tracks released in compilations of 90s.

Phoenix (6)
A project of friendship between members of Nibelungen from France and the vocalist of Viking from Sweden.
Released one album: A week in Valhalla (1997)
Appeared on v.a. cds: Give them a Future, Justice - A P.O.W. Support compilation and Soutien des Prisonniers.

Phoenix (8)
A seven-piece Oklahoma City garage-soul band that released one 45 in 1969 and received great regional success for a couple of years.

Identical (From The Motion Picture "On The Rocks") (CDS)