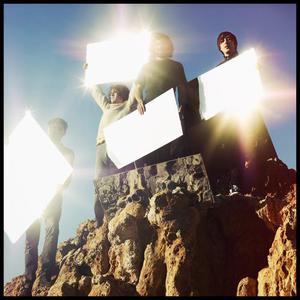 Along the white sands of Barcelona, a community of music makers have been combining the delirious house sounds of the sundazed club scene with the irresistible melodies of contemporary pop. At the forefront of this scene is Delorean, a Barcelona-via-Zarautz quartet whose uniquely Mediterranean sound has made them one of Spain's most popular independent bands. Taking cues from Spain's native Balearic beat, Madchester, house, techno, R&B and indie rock, Delorean carves out a sunny sweet spot between the stage and the dance floor.

Delorean formed in 2000, in the Basque coastal town of Zarautz, as the outlet for a group of teenagers wrapped up in their local punk scene. Eventually, though, bassist/singer Ekhi Lopetegi, drummer Igor Escudeo, keyboardist Unai Lazcano, and guitarist Guillermo Astrain began exploring their mutual interest in electronic music. After moving to Barcelona in 2007, they focused on computer-based writing and production, and started their own eclectic club night, Desperrame, as an antidote to the relative darkness of the techno scene. Like-minded clubgoers expanded Delorean's rich palette of influences, and their remixes for bands like the XX, Cold Cave, Franz Ferdinand, Lemonade, El Guincho, and Glasser provided the band with playgrounds for digital experimentation to hone their own sound. Last year's lauded Ayrton Senna EP took them further away from their rock influences and toward the euphoric club-inspired sound that feels like their destiny all along.

Their new album, Subiza ? named after the bucolic Basque town in which it was recorded ? is Delorean's defining work to date. Fusing relentless hands-in-the-air club rhythms with the shimmering melodies they've long toyed with, it drips with decades of dancefloor history while retaining Delorean's own adventurous voice. Densely layered digital production is sent back through analog tape to conjure a warm, whirling aesthetic that feels organic and fresh. Singer Ekhi Lopetegi colors the music with reflections on love, distance and longing. Says Lopetegi:

?The lyrics talk about love and joy as a feeling so strong that it distorts memory?that's what
ecstatic means to me, this experience so big that it breaks up the normality of everyday life.
Ecstasy and love put you in an extreme state, therefore one of risk. If the music sounds
uplifting it's because it aspires to be something that intense and crucial.?

With Subiza, Delorean have found the emotional core of the club music that has long consumed them, and made it something less rigid and very personal. A first listen is exhilarating, each subsequent listen a revelation. Without trafficking in false Utopias, Subiza is a soulful suite of blissed-out music that heralds the latent promise of a perfect summer.