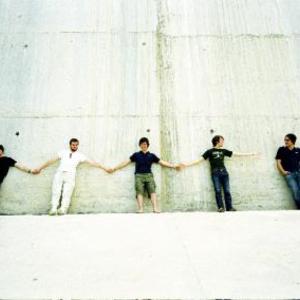 Mumm-Ra were an indie rock band which formed in 2000 in Bexhill-on-Sea, East Sussex, United Kingdom. The band consisted of James New (vocals/keyboard/guitar), Oli Frost (guitar), Niall Buckler (bass), James Arguile (guitar), and Gareth Jennings (drums). Their name was taken from a character from the American 1980s animated television series, ThunderCats (who was a mummy of the Egyptian god Ra). In 2008, the band broke up after 7 1/2 years of playing music together.

The band described their music as "pop music that sweeps and sways and hopefully does justice to the music that makes us get up in the morning."

Their debut release in April 2006 was a limited clear 7" available on tour or online, consisting of What Would Steve Do? (demo) backed with Song E. Each copy came with a postcard signed by a band member.

Mumm-Ra's first release "proper" was the Black Hurts Day And The Night Rolls On EP.

The EP was received with favourable reviews and encapsulated the diversity of the band - from the unpredictable and schizophrenic Song B to the mystical fairy tale stylings of The Temple.

Mumm-Ra's impressive live performances have assured a rapidly expanding fanbase, having played support slots with numerous high profile bands including The Kooks, Fields, The Automatic, Jamie T, The Longcut and The Killers. Live favourites included set opener Now Or Never, closer Out Of The Question, She's Got You High and North Of France.

The single She's Got You High was released on May 14th, followed by the debut album, These Things Move In Threes on May 28th 2007.

On the 17th of April 2008, after 7 years, 11 months and 21 days of being together, Mumm-Ra decided their journey as a band had come to an end. However, the band mentioned through MySpace bulletin's that there may be a possibility of various members having new projects in the future.

Back To The Shore

What Would Steve Do? (EP)

She's Got You High (CDS)

These Things Move In Threes

Black Hurts Day And The Night Rolls On (EP)