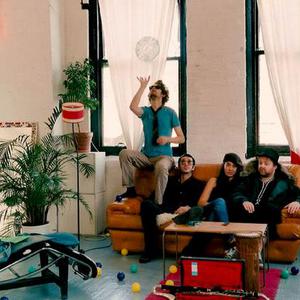 The band released their debut EP, I Saw Such Things in My Sleep EP, in September 2005; all 1000 copies sold out on the day of release. In January 2006, Guillemots were awarded fifth place in the BBC's Sound of 2006 list of favourite up-and-coming acts.

Their full-length debut LP, Through The Windowpane was released in July 2006, including Made-Up Lovesong #43 from the Such Things EP and other previous singles Trains to Brazil and We're Here. The album's release date was timed so it would be eligible for the 2006 Mercury Music Prize, and the album did make the shortlist.

During the recording sessions for the album, the band recorded an EP entitled Of the Night made up of one song written by each band member. It was released via the internet on Valentine's Day 2006 and performed live in its entirety at the BBC Electric Proms 2006, with the BBC Concert Orchestra. Their performance of Bad Boyfriend was particularly memorable for the band donning animal masks, and Fyfe crying "Take me to orchestral paradise!" before the song's orchestral culmination. The EP was eventually released on CD and LP in November, to independent music shops only.

They were Scissor Sisters' support on their stadium tour in late 2006 and released a reworked version of Annie, Let's Not Wait, on 15 January 2007.

The latest album 'Red', which features an even more eclectic mix of influences and ideas, was released on March 24th 2008.

Guillemots returned with critically praised 'Walk The River' in 2011.

In May 2012 the band announced that they would be writing and recording four seasonally themed albums over the remainder of the year and in to early 2013, starting with 'Hello Land!'

Falling Out Of Reach (CDS)