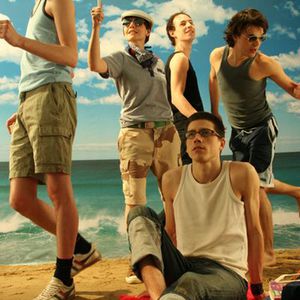 For about six years I played the bass in Envelopes. The first five of those, I only met the band a few weekends a year, and during those weird Christian holidays. Audrey, Henrik and Fredrik hung out and recorded some tracks on the computer. Once in a while we assembled for a couple of days of around-the-clock rehearsals, to pull off some show, usually in Paris. The first show ever was in Sweden though. That's when Filip was recruited and a proper functioning pop band was created. Indeed. The show was quite well received, but was to be our last on Swedish turf for a long time.

We played every Parisian venue, and Benicassim Festival in Spain, before getting any recognition at all in Sweden.

Eventually, Envelopes were approached by London based label Brille Records. We were going to be their first band. To make it work professionally though, we had to meet more often than a couple of times a year, and cut a few years from our usual song production time. So we had a crack at it, and told Brille what we needed to be a proper functioning band, for real: a house for five people, with recording equipment, and no obligations to work with anything other than the music to support our living. What do you know? They said yes.

To this day the band have cost tons and made zero money, but a few people think they are the best band ever. Music always gets you right at the heart when it risks being ridiculous. Envelopes are very direct and uncomplicated in this way. And yet, in other ways, elusive. The message is never in the lyrics, and rarely in a hook, but rather somewhere in the saturated cluster of melodies, woven into a multi-coloured flying rug, circling around your head on its passing. You have to hear it. Really. It is a message of all-defying unjustified joy. And ?Here Comes the Wind' is a future classic. Usually I'm all about ?to each their own? and unwilling to pass aesthetic judgement, but this album is of profound quality.

My last nine months with the band, in 2005, I lived with them in a big house outside Elvington, North Yorkshire, surrounded by vast fields of farmland. Animal Farm, GTA San Andreas and the 144 episodes of Buffy the Vampire Slayer, imported from Hong Kong, only lasted so long. Cabin fever, running out of heating oil and endless amounts of rain nearly broke us. Our hope was only kept alive by frequent London shows and the pot of gold stored on our hard drive, the possibility of a damn good album. Sometimes we could almost touch it. I have heard seven versions of some of these songs and recorded half of them. There were a few defiantly behaving children I thought I would never see, or hear, released. That's why it is so rewarding to finally hear them completed. Although, I must admit that the versions I am listening to whilst writing this will undergo a few changes still. It is Envelopes we are talking about and they have serious problems declaring anything finished and final.

I am proud of this bunch. I had to jump ship shortly after the efforts of six months of recording were reinterpreted as ?sketches?, and recording from scratch was declared to commence in a real studio. But they bit the bullet. It's been over a year now, and I have hardly seen them. They entered boot camp mode, closed the blinds and learned how to use the fancy coffee machine in southern Sweden's Tambourine Studios. And then they didn't leave.

Halfway through their Tambourine exile I saw one of their rare Swedish concerts. It's such a treat to be off-duty and just enjoy the show. My last effort for the band was writing a book of bass tablature for my replacement Ulf, for him to learn before their tour. He did it flawlessly. Listening to my favourite band playing my favourite songs on stage, for the first time, was easily one of my very best concert moments. It happened to be the band I had never been able to see before, since I was in it. They were good. Very good. Do try and see them. People usually really like it.