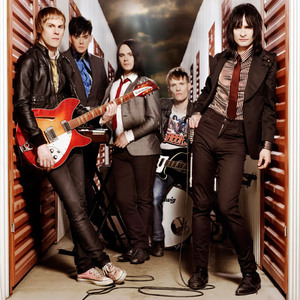 Formed in 2000, Melody Club is a synthpop band, who grew up in a small town called V?xj? in Sweden and met in school. Singer Kristofer was living in the rehearsal room with no kitchen, no toilet, no heating. This was where he wrote many of the songs for their first album on a 3-string acoustic guitar. The boredom of the small town drove them away to the capital city of Stockholm. They took odd jobs spent the rest of the time making new songs and recording demos. The band was offered a record deal in 2002.

Melody Club hit like a freight-train in Sweden with their debut single Palace Station. The tune has a distinctive frenetic pounding drum-beat, pumping bass line and a simple but powerful synth theme. This song became the break through Melody Club needed. This single was followed by the gold selling debut album Music Machine and a never-ending European tour.

After several successful tours in England things started to happen and the NME deemed the band Abba with balls. 200 gigs later it was time to go back into the studio, this time in Copenhagen. From this came the second album Face The Music, supported by a 150 gig European tour. It is songs from these two albums that have come together to make the new hybrid album At You Service.

Melody Club will enslave you with a blend of disco, punk and new wave mayhem. The tunes will make your head rotate with pleasure. Melody Club took the best pop music you ever heard, rammed it into their power blender and poured it into my ears.