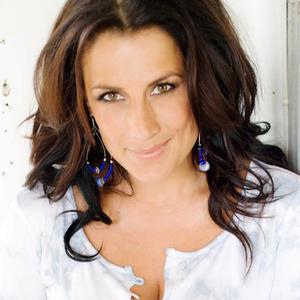 Jill Anna Maria Johnson, born May 24, 1973 in ?ngelholm, is a Swedish country- and pop-singer and songwriter. She performed the Melodifestivalen 1998 winning song K?rleken ?r, and represented Sweden at the Eurovision Song Contest 1998 with that song, which finished 10th with 53 points. In 2003 she again entered Melodifestivalen with Crazy in Love, which finished fourth in the final. She also hosted the final of Melodifestivalen in 2005. Johnson is today one of the most successful artists in Sweden, with several gold and platinum records.

Johnson is from the small town of ?ngelholm in the south western part of Sweden, but the surroundings and the media compare her with the biggest stars in the music business. By the age of four, she had decided that she wanted to become an artist. She was highly encouraged by her local choir leader.
She now lives in a hunting lodge in the Western Gothlandic woods of Sweden, but also has a home in Stockholm.
As a 12-year old, she started off as vocalist in a Country & Western band, Tomboola Band, touring in Norway and Denmark. She signed eventually with EMI-Medley in Denmark and recorded an album, produced by top producer Paul Bruun. The title-track, Sugar Tree, became a hit in Denmark. In 1996, she had her first Swedish hit with Kommer tid, kommer v?r?, a duet with Jan Johansen.
In 1998, she performed K?rleken ?r at Melodifestivalen, winning the Swedish finals and going on to represent Sweden in the Eurovision Song Contest. This established Johnson as one of the prime Swedish artists. The success was followed by the hit album N?r hela v?rlden ser p? and a successful tour.
In mid 1999, Johnson went to L.A. to look for material for her second album. At home, she worked with Andreas Carlsson (ASCAP Writer of the Year 2000), who is known for several massive hits, the biggest , so far, being Celine Dion's That's the Way It Is. She also tried out a few local new-comers and the album Daughter of Eve was released in early 2000. It was very well received and Johnson was compared with some of the world's best artists.
In 2000, she received a platinum-record in Denmark for the sound-track Promise To Love from the Danish block-buster, "Eneste Ene". Later that year, Johnson started to collaborate with other songwriters such as Jenny Orenstein, Charlie Stefl, Mary Green [Biem Writer of the Year 2001]. This resulted in her receiving a Publishing contract in Nashville Tennessee. Consequently, in 2002 Johnson's album entitled "Good Girl" came to be with the help of producer Scott Bagget and some of Nashville's top musicians. This album secured Johnson's artistic sound and style and once again she was extremely well received by the press in their reviews where she was described as an artist of International calibre.
In the Swedish finals of the Eurovision Song Contest 2003 she qualified at fourth place (out of 32 entries) but and her song ?Crazy in Love" became a hit and received a great deal of radio play and was followed by a successful tour.
Johnson's collective "Discography" CD was released in late March 2003. It contains the 20 most popular songs since her debut in 1995. This Cd went straight into the sales charts for best selling CDs in Sweden. The single ?Crazy in Love? stayed at No 1 in the Swedish Top Charts (Svensktoppen) 12 weeks consecutively and No 2 for 15 weeks. "Discography" sold Gold in Sweden and Johnson also got a Grammy for this album.
The new album "Roots and Wings" was released in November 2003, recorded and produced by Amir Aly in Sweden and by Scott Baggett in Nashville, USA. "Roots and Wings" sold gold in less than two weeks and platinum a few months later. The album "Being who you are" was released in Sweden in late March 2005 and sold gold in only a few weeks. Johnson was the host of the 2005 Swedish finals of the Eurovison Song Contest in Stockholm

For You I’ll Wait

A Woman Can Change Her Mind

The Heat Is On (CDS)