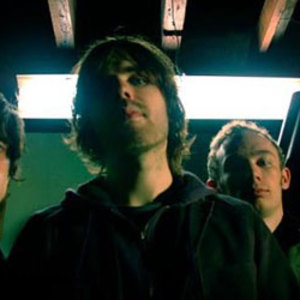 Hail Social is a quartet, though sometimes a trio. Philadelphia is their home base, though some of the guys live in nearby Jersey. Their self-titled debut is brand new to the world, though it feels old to them, of course. It all started with the chance workplace friendship of Dayve Hawk and Matt Maraldo. Hawk had been writing songs for years but was reluctant to share them. Eager to start a band, Maraldo kept on pestering. ?We fought a lot because I didn't want to be in a band,? says Hawk. ?But eventually he won.?


Following four demos and a 7-inch, the album was recorded in Philly with producer Brian McTear (Burning Brides, matt pond PA). The lineup goes like this: Hawk handles guitar and vocals, Maraldo plays drums, and Dan Henry plays bass, with Richie Roxas playing second guitar live. ?Hands Are Tied? introduces the band perfectly, with Hawk's meticulous melodies riding that sleek wave of a rhythm section. Like every song that follows, it's lean and brisk, bearing not one superfluous note. But wait. There's something sinister brewing under those bouncy bass lines. On ?Repetition,? it's the sting of regret as Hawk sings, ?It all just adds up to our lives? and later, ?But you can never bring back what you let go.? Rarely has paranoia and frustration been so danceable. ?Come Out Tonight? is all teen isolation and endless nights, where the only escape is your favorite song. Then there's the angry defeat of ?Feeling is Wrong? ? ?Don't fight / Don't try / You don't get to decide tonight.?


Lyrics like those might explain why Hawk needed coaxing to take his songs beyond the bedroom. ?I'm definitely the anti-social guy,? he says, noting the irony of the band's name. Hawk is still half-wedded to the solitude of songwriting, recording all the songs in demo form at home before the bandmates enter the fray. ?I played to the strengths of this band? on this record, says Hawk, ?especially the rhythm section, which is why things are so sparse and stripped down.? That's also why Hail Social comes off a bit like the propulsive post-punk that is so fashionable these days, although Hawk's smooth singing and festering lyrics recall '90s indie rock mainstay Versus more than anything.


?I do like a lot of those bands, some more than others,? Hawk admits. ?I like Wire a lot. But I wouldn't say they're nearly as much of an influence as people presume.? His tastes actually run more toward electro and funk, from Michael Jackson to Daft Punk to Prince. Hawk says he envisions Hail Social as ?like ?80s roller-skating music played by a metal band.? Hmmm. Maybe that'll make more sense once we hear the band's second album, which is already in the can. Then, again, maybe not.