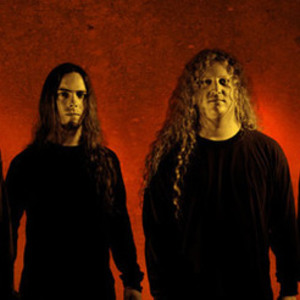 There is more than one artist with this name: 1) A Canadian technical death metal band. Martyr's intricate and aggressive Technical Metal style is built on complex structures which allies a multitude of emotions from many different musical approaches. The music is not limited to the conventions of traditional metal music, the band striving to push those limits to create a more open-minded concept. HISTORY & ACTUAL LINEUP

1) A Canadian technical death metal band. Martyr's intricate and aggressive Technical Metal style is built on complex structures which allies a multitude of emotions from many different musical approaches. The music is not limited to the conventions of traditional metal music, the band striving to push those limits to create a more open-minded concept.

Martyr is based in Quebec, Canada. Their music is often seen as technical progressive death metal.

Martyr's concept was officially created in 1994 by Fran?ois and Daniel Mongrain.

In May 1997, Martyr began the production of their debut album, HOPELESS HOPES.

In the Winter of 2002, Martin Carbonneau joined the band as a replacement for Pier-Luc Lampron on the guitar. In the past, Martin happened to play with Patrice's debut band.

In 1999, Martyr recorded the WARP ZONE album at Victor Studio with producer Pierre R?millard (Anvil, Gorguts, Cryptopsy, Quo Vadis). Guest vocalist Luc Lemay from Gorguts made a narration on the last track of the album.

In the Summer of 2001, Martyr recorded a live concert in Rouyn (QC, Canada) for the production of a live album, EXTRACTING THE CORE, which was released in September 2001 through Skycraper Music.

In 2003 and 2005, Martyr did two pre-productions of their album FEEDING THE ABSCESS.

In October 2006, Galy Records released the reissues of HOPELESS HOPES and WARP ZONE, along with the third album FEEDING THE ABSCESS, recorded at the Wild Studio with Pierre R?millard and Yannick St-Amand, and mastered by Alan Douches.

In April 2008, Galy Records released a 187 minutes DVD entitled HAVOC IN QUEBEC CITY. The concert was recorded with eight cameras at the Imperial of Quebec City.

Themes like affliction, oppression, and agony had to be conveyed by a single word. With this concept in mind, the name "Martyr" was decided upon.
Martyr's music is reflected through lyrics which express emotions such as anguish, outrage, revolt and indignation towards humanity, and the need to improve oneself within this harsh environment. But all in all, the best way to understand this is to listen to the music... and let it drown into your soul.

2) During the five years that Dutch Steel Legends Martyr was alive and kicking (1982-1987), the band released two albums that are considered cult in the Metal scene today. ?For The Universe' (1985) and ?Darkness At Time's Edge' (1986) are classic Metal, a delight for those who love strong melodies, speedy riffs and a high level of technicality.

In those years, Martyr appeared on compilation albums from Roadrunner and Metal Blade, was voted Holland's best new Metal band in Aardschok magazine, has toured with several international acts and appeared on Sky Channel's Monsters Of Rock.

Martyr disbanded in 1987, but reunited in 2001 to play the Heavy Metal Maniacs festival. Four years later, the band revived almost the complete 1982 line up to play the Headbangers Open Air and Keep It True festivals. The flame has been burning again and the band continued to play live ever since. December 2008 MARTYR supported US Shock Rockers Lizzy Borden on their European tour. Summer 2009 MARTYR hit the European stages supporting Flotsam & Jetsam and in Fall they did the same with Vicious Rumors.

In 2009 the first new Martyr record in almost 25 years has been released . That's when the new EP ?Fear' will be coupled with a re-release of the classic ?For The Universe' album as a double digipack entitled ?Fear The Universe' on Rusty Cage Records (RCR0017). A new record is planned for late 2010, early 2011.

Beyond the Flames Eternal Demo, 1998
Resurrection of Our Prophecies Demo, 1999
To Confirm When Destruction Comes EP, 2002
A Malicious Odyssey Full-length, 2004

4) Martyr was a Czech death metal gruop which consisted of Petr "Christopher" Kry?tof, Paul Speckmann and Libor "Skull" Leb?nek. All of them are known for their engagement in Krabathor and Master.

The band formed in 1999 and a year later released one and only album "Murder X: The End Of The Game" before finally splitting up.

5) A Christian metal band from the late 1980s. Later went on to be Betrayal.