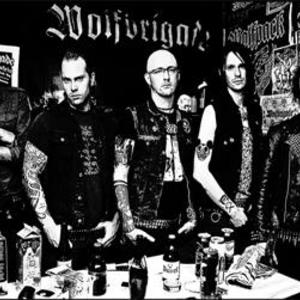 Wolfbrigade (formerly Wolfpack) are a d-beat/hardcore punk band from Sweden featuring members of Asta Kask, To What End?, Today's Overdose, Cosa Nostra, Anti-Cimex, Obscure Infinity and Harlequin. Former singer Jonsson was forced to leave the band in 1998 because, as the band said, the situation had become "intolerable." They later recruited their current singer, Micke, who was a childhood friend of Erik,Jocke and Frank and went on to record vocals in Allday Hell.

At around the same time, they changed their name from Wolfpack to avoid association with a Swedish neo-Nazi organization who shared the name. Later in 2002 drummer Frank left and Dadde who was a friend of the band became their new drummer. In 2004 Wolfbrigade split up due to a combination of reasons including the vocalist, Micke, being stricken with a throat infection.

On January 7, 2007, Wolfbrigade announced on their official myspace profile that they were reuniting, with a new bassplayer, Johan who also play in Today's Overdose, the band that 4/5 of Wolfbrigade started when they broke up. The band is writing new material and it will be out in june on the album "Prey to the World".

In december o 2008. Wolfbrigade release their fifth album entitled Comalive, which goes back to their roots in Wolfpack. Shortly a Germany tour followed and sold out performance in Stockholm.

Run With The Hunted

Prey To The World