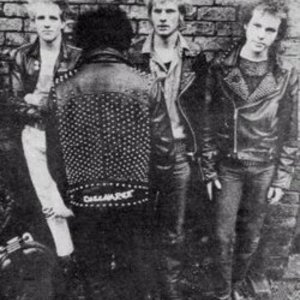 Discharge are a British hardcore punk band formed in Stoke On Trent, UK in 1977. They are one of the world's first hardcore punk bands, and are often recognized as one of the main bands responsible for starting crust punk, and serving as sole inspiration for a legion of bands who played a style of hardcore punk called "d-beat" for how they paid tribute to Discharge's distinctive guitar and drum interplay. They later went on to play in the '80s crossover hybrid of hardcore and thrash. Discharge are still active today, fronted by The Varukers vocalist Rat.

Discharge formed with the original line up of Terry 'Tez' Roberts on Vocals, Tony 'Bones' Roberts on Guitar, Roy 'Rainy' Wainwright on guitar, Nigel Bamford on bass and Akko on drums. Shortly after Nigel Bamford left the group and Rainy moved to bass. This line up sounded much more like the Sex Pistols and only recorded one demo.

The line up and the sound changed in 1979. It became: Kelvin 'Cal' Morris on vocals, Bones on guitar, Rainy on bass and Tez on drums. Many consider this line up to be the "classic" Discharge line up.

Their heavy guitar-driven sound and anti-melodic screamed vocals of the new line up earned an early crossover appeal to fans of speed metal. Their songs focused on anarchist and pacifist themes emphasizing the grisly effects of nuclear war and capitalism. After the EP releases in 1980 Discharge went through many line up changes. Tezz (drums) departed and was replaced by Dave 'Bambi' Ellesmere (formerly of The Insane) before "Why". The Never Again EP saw another lineup change. Gary Maloney of The Varukers played drums. Bones departed before "Warning..." . Many see this point as the transition from hardcore punk into metal. The band saw another change in the line up in 1985 with the release of "Ignorance". The band saw many more changes with it's transition into a more metallic sound. In 2002, however the original line up was reunited for the release of "Discharge".

Discharge also pioneered D-beat as a punk subgenre. The D here, of course, stands for Discharge. D-beat has historically enjoyed popularity in Japanese, Brazilian, and Scandinavian hardcore and punk scenes, and is currently gaining ground in North America. During and after Discharge's career it became surprisingly popular to imitate the band to numerous extents. Many bands who ran with Discharge's style, primarily in Sweden, began using the "Dis-" prefix in their names, and even began using "Des-" words with "Dis-" in its place as a parody; Disfear, Disorder, Discard, Disarm, Dissucks, Distraught, etc. The bands who followed this naming trend also used clones of Discharge's large white logo lettering.

Rock superstars Metallica recorded covers of two Discharge songs, "Free Speech For The Dumb" and "The More I See", on the studio album/cover album Garage Inc.

Fellow Thrash metal band Anthrax recorded a cover of "Protest and Survive" on the studio album Attack Of The Killer B's.

Canadian industrial metal band Monster Voodoo Machine named their 2nd release "State Voodoo/State Control" after Discharge's "State Violence/State Control". The band also recorded a cover version of "Hear Nothing See Nothing Say Nothing" on their "Bastard Is As Bastard Does" cd single.

Protest And Survive: The Anthology

Beginning Of The End (VLS)