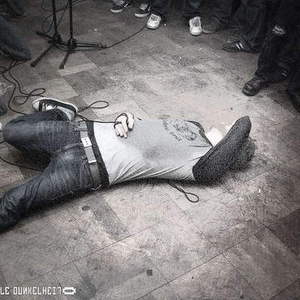 Anti-Bofors released a 7? on their own label No Records, then found a new vocalist and wisely changed their name to Disfear. In October 1992 the band recorded their eponymous debut EP in Sunlight Studios under the guidance of famed Entombed producer Tomas Skogsberg. Encouraged by the overwhelming response, Disfear went back to Sunlight and cut the classic MCD 'A Brutal Sight Of War,' released in August 1993. 'A Brutal...

received rave reviews in Kerrang! and was voted 1993 Top Hardcore album in Rock Hard, the German bible of earsplitting music. All this media attention was followed by a tour in Germany with Swedish pals Uncurbed.

In April 1995, DISFEAR recorded their first full-length 'Soul Scars,' released on Distortion in May 1995. The album got top reviews and to promote the release, Disfear toured Sweden with GBH and DRI, as well as the UK with English legends Doom as special guest. After the tour Disfear left Distortion and signed a deal with French label Osmose Productions.

The Osmose record ''Everyday Slaughter' was released in October 1997. In March 1998, longtime vocalist Jeppe decided to leave the band. His replacement was none other than ex-At The Gates vocalist Tomas "Tompa" Lindberg, one of extreme music's best screamers. With this new and re-vitalized line-up, more shows and festivals in Sweden and Europe followed. The band also recruited new drummer Marcus Andersson, with founding fathers Bj?rn Pettersson (guitar) and Henke Frykman (bass) completing the line-up.

Upon the release of 'Misanthropic Generation' and 'Swedish Assault,' Disfear snared several high-profile gigs. After adding Uffe Cederlund (Entombed) as their second guitarist, Disfear went on the Close Up Magazine-sponsored ?Close Up Made Us Do It? tour with Entombed and fellow countrymen Raised Fist. This tour coincided with Disfear's first ever cover feature in January 2004 (Close Up #63). The band also got to share the stage with d-beat originators Discharge in Umea, Sweden at Punkfest 7 in early March 2004. The band then embarked upon a spring European headlining tour, followed by their first US appearance as part of Philadelphia's Pointless Fest along with Tragedy, Kylesa, Municipal Waste, and more.

In spring of 2005, DISFEAR toured Finland and Sweden with Rotten Sound before a couple of festival appearances (Fuck The Commerce, Obscene Extreme, and more). During this time, the band also began writing their follow-up to ?Misanthropic Generation'.

2006 saw the first Disfear North American tour, sharing stages with the likes of Misery Index, Phobia, Tragedy, Cursed and more. Upon returning home, the band went back to work on writing their new album.

The band wrapped up writing in the early months of 2007. Disfear broke only for a few a days in May for a brief tour in Germany and the Czech Republic. They arranged for studio time in the late summer with Converge guitarist Kurt Ballou at his Godcity Studio in Salem, MA to record the ten songs that will make up ?Live The Storm'.

?Live The Storm' will see its international release in January of 2008 and with songs such as "Get It Off", "The Furnace", "Deadweight" and their ilk prove, Disfear are the undisputed kings of crust-core.