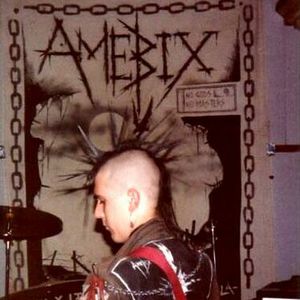 Amebix are a British crust punk band that formed in 1978. Many consider them to have started the subgenre crust punk, by mixing heavy metal with anarcho-punk. They established crust as being separate from thrash metal by mixing post-punk music with metal riffs and atmospheres, as opposed to thrash bands' mixing of metal music with punk rawness and speed. Influential in the anarcho-punk genre, Amebix' song "No Gods, No Masters" became a slogan for the movement worldwide. They were originally called The Band With No Name, and shared a squat in Bristol for part of their career.

Their music, heavily influenced by Mot&ouml;rhead (and to a lesser extent Lemmy-era Hawkwind), Black Sabbath, Venom and early Killing Joke, combined with an ethos and worldview akin to Crass, represented their non-traditional lifestyles.

Their music blended hardcore and heavy metal into a form of early thrash metal. Such notable talents as Nausea (NY), Extinction of Mankind, Sepultura, Choking Victim, Neurosis, Napalm Death, and Deviated Instinct have paid homage to these masters.

The band split in 1987 after release/distribution difficulties associated with the Monolith LP.

Members went on to perform in Zygote. Bassist/vocalist "the Baron" now lives on the Gaelic speaking Isle of Skye and makes ceremonial swords.

In 2008 they reformed with ex Nausea drummer Roy Mayorga and have made few tours since. Most notable the U.S. one. They are now going strong after the reunion, having released an EP of re-recorded old material called Redux in 2010.

As of 2011 they have released a new album Sonic Mass.

The Power Remains The Same

Beginning Of The End