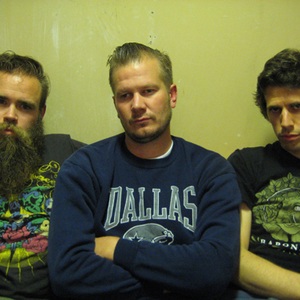 Massgrav is a high-energy hardcore punk band from Stockholm, Sweden. Back in the early '90s Johan and Ola used to hang out, drinking a lot of cheap wine while they were listening to old Mob 47 tapes and Discharge records (well, mostly the a-side on "Why" since Ola had glued it to his recordplate during a drinking session...) The Boys decided that it was time they did something on their own, so they wrote a few songs and formed Massgrav.

They started to rehearse with a spanish drummerboy called Erlando and it resulted in the now classic rehearsaltape "Spr?ckt skita i pik?ten", or "Cracked ass in the copcar," containing 8 blistering and ass kicking HC songs on a recording that nowadays only can be found as a rare item on Ebay, if you are lucky! "Spr?ckt skita i Pik?ten" went down really well in the underground scene and Massgrav did some drunk, chaotic and successful touring, mostly in the Eastern part of Europe - where they were hailed as kings. Then came the first major setback for Massgrav. Erlando, the drummer, had some serious problems with alcohol and drugs and just couldn't keep up with the pace in the songs since he was high all the time... So, J&O had to sack the sucker and they decided to put Massgrav on ice for a while (4 years!!) when they started the search for a new drummer... And man did they find him!? In the year of 2001 J&O where down in Gothenburg to participate in the anti-EU riots and there they found Conny Sl?gga, an angry anarchist who'd hated everything and everyone and could play the drums faster than you could imagine. J&O forced him to join Massgrav, and the band was back on the track! In February 2002 Massgrav entered a studio in Stockholm with the legendary punk-producer T. Birnik. The result? "Fast i Skiten" (Stuck in the shit) 7 new tracks of pissed off Scandi HC-thrash with no mercy. Unfortunately, the mixing got delayed due to financial problems. So Massgrav had to do the already booked Polish spring-tour without the new record. A big disappointment to all the Polish crust-fans who'd been saving all their money to be able to buy this long awaited piece.

This War Will Be Won By Meat Eaters