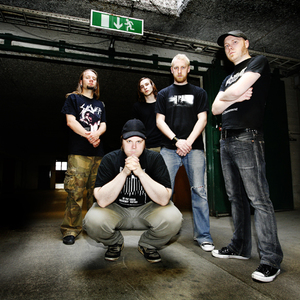 COLDWORKER is a Swedish death metal/grindcore band. The band came to existence about a year after Nasum tragically called it the quits. Drummer Anders Jakobson started looking for members for a new grinding band. After posting in his blog at Nasum.com, Anders Bertilsson (of Ruin) - vague acquaintance to Jakobson - offered to play the guitar in the band. At the same time bass player Oskar P?lsson (of Relentless) was looking for a session drummer for a possible solo demo. He asked Jakobson who informed him about the new grinding band plans and the two ideas were quickly merged into one.

The three members started to send riffs back and forth building up a small library of ideas.

The first rehearsal took place a few months later. The band continued to write songs and do rehearsals the following weeks. A decision to add a second guitar player was taken and the band announced for a fourth member in Jakobson's blog. It did not take long for the band to wait, as Andr? Alvinzi (of Carnal Grief) answered to the call, and joined the band as the second guitarist. As the fourth songwriter in the band, Alvinzi rapidly added the last piece to Coldworker's puzzle of sound, introducing some more technical riffs into the grinding death metal.

Time passes, and later on the band's name - Coldworker - is announced and later in April Joel Fornbrant (ex-Phobos) joins the band on vocals. As a five-piece the band continues to write and work on the songs for the coming debut album. In June 2006 Coldworker did it's first show together with Gadget and Radioskugga and then immediately started recording their first album "The Contaminated Void", which was released October 31, 2006.

Following the release of the debut album, the band did some local shows in Sweden. In January 2007, guitar player Andr? Alvinzi left the band and Daniel Schr?der(also in Ruin) joined the band. In the summer of 2007, the band went on a mini European tour with Misery Index and Dew-Scented.

After the tour and the member change, the band began working on new material for the second album. Through December 2007-January 2008, they recorded their second album. The name of the album is "Rotting Paradise" and is expected to be released worldwide around the beginning of May 2008.

"Rotting Paradise" was recorded at four different locations. The drums were recorded in Soundlab Studios, the guitars at the home of Johan Berglund (This Haven), the bass at the home of Jakobson and the vocals at Coldworker studios. The album was then mixed and mastered by Dan Swan? at Unisound. 15 songs were recorded, 12 ended up on the album, a 13th song - a cover version of Sepultura's "Necromancer" - ended up on the Japanese version of the album, and two songs were saved for the future. Sample tracks are available on http://www.coldworker.com/newspost.php?id=54