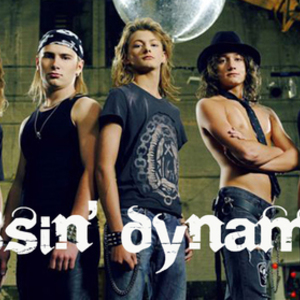 Kissin' Dynamite is a traditional heavy metal band from germany. Originally named Blues Kids, the band changed its name to Kissin Dynamite in 2007 December 2007: Some music journalists discover a 4-track CD in their Christmas mail by a combo hitherto unknown to them, called Kissin' Dynamite. No booklet. Zero background information. But what they hear needs no further explanation: Gripping hard and riff rock professionally produced and influenced by M?tley Cr?e, Whitesnake and AC/DC ? reminiscent of NWoBHM sounds by the iron pioneers themselves...

Originally named Blues Kids, the band changed its name to Kissin Dynamite in 2007

December 2007: Some music journalists discover a 4-track CD in their Christmas mail by a combo hitherto unknown to them, called Kissin' Dynamite. No booklet. Zero background information. But what they hear needs no further explanation: Gripping hard and riff rock professionally produced and influenced by M?tley Cr?e, Whitesnake and AC/DC ? reminiscent of NWoBHM sounds by the iron pioneers themselves, and an anthemic pathos HammerFall and Manowar could not pull off any better-, lets expectations towards the entire record by these nobodies rise sky high.

6 months later ? July 2008: The Kissin' Dynamite debut STEEL OF SWABIAis finally available in stores. And it lives up to the expectations created by the 4-track appetizer released just before the turn of the year. Especially as, to the astonishment of the audience, it leaks out that the guys who delivered this masterpiece are not grown men with decades of experience as musicians, but simply teenagers who will have to wait another two or three years until they come of age.

And that's not all: During their gigs, which most of the times take place on weekends due to their class schedule, singer Hannes Braun, his brother and guitar player Ande as well as guitarist Jim M?ller, bassist Steffen Haile and drummer Andi Schnitzer perform with such rousing musical enthusiasm and talent that the audience at biker festivals, metal heads at the renowned ?Bang Your Head? festival and the international crowd at the Czech ?Master of Rock? festival got carried away with encore cheers. Even the Teutonic metal institution Udo Dirkschneider (former Accept, U.D.O.) was so deeply impressed by the five Swabians that in December 2009 he hired them on the spot as support band for the following three shows in the course of his tour ? throughout their entire gig he would admire their performance from off stage. On top of that he also paid a spur-of-the-moment visit to their studio at the beginning of January to record the vocals of a track together with Hannes - a true accolade. U.D.O. bassist Fitty Wienhold already considers Kissin' Dynamite to be the stars of tomorrow, which might be able to step into the shoes of the veteran heroes of today, once these retire.

These youngsters do not leave the slightest doubt that this vast amount of early praise has been deserved, because their second album ADDICTED TO METAL is in no way inferior to their fantastic debut. The twelve tracks of their new album, which were, just as the debut album, produced in cooperation with the Flensburg production trio Elephant Music, boast once again the above-average maturity of these young musicians, who, by virtue of their talent and their already outstanding understanding of harmonics, obviously don't have to hide behind the established stars of the scene.

Even the programmatic title song in itself - preluded by the sound of a hammer blow on an anvil, the same track to which Udo Dirkschneider contributed a few vocal passages - marches straight and stoically into the ear, where it sticks thanks to its catchy shout chorus and will most likely turn into an excellent head-banging trigger at live concerts. Just as the rhythmic ?We Want More?, which even on the biggest stages on our planet is the perfect sing-along track thanks to its sensational chorus, and which, in addition, knows how to impress by brilliantly highlighting its lead guitars.

?Iron Fist? - a song about the legendary Swabian knight G?tz von Berlichingen by the way - is introduced by ballad-like sounds, first lulling the audience into a sense of peace and quiet, before the five Swabians let us know how much they have also been influenced by Accept and U.D.O or Judas Priest, especially with their achievement of the century PAINKILLER. 'Why Can't You Hear Me' then again amazes with compelling Hendrix guitars, before this number turns into one of the most atmospheric and melancholic anthems since ?18 And Life? (Skid Row) with front man Hannes showcasing his vocal talent in an awe-inspiring way.

The fast-paced and relentlessly driving ?Run For Your Life? is the perfect anthem for fast highway rides on hot summer days in a convertible car ? just as the memorable, enthralling and feel-good 'Love Me, Hate Me' that convinces with finest stadium gig power. 'Supersonic Killer' turns out to be a first-class biker anthem that taps your spine and moves straight into your blood. 'All Against All' is a brilliant homage to Iron Maiden, and, thanks to the well-dozed classy guitar licks, a tribute to Yngwie Malmsteen.

Last but not least, the fiercely performed and much more rocking interpretation of Damn Yankees.. ?High Enough? - the original being a rather ballad-oriented track without high recognition value - illustrates the five southern German's phenomenal musical understanding and their high standards: ?A good song always wins?, as guitarist Ande unveils one of the band's secrets to success, not without exuding a good deal of self-confidence. Another secret to their success is that they have grown together ?naturally?, as five school friends got together that all vibe with one another, joining forces to make their dream come true: to travel the world as professional musicians with their band Kissin' Dynamite one day.

There is a very good chance this will happen, as their debut STEEL OF SWABIA, their new album ADDICTED TO METAL as well as the guys' passion and spirit show. Critics already praise Kissin' Dynamite to be ?the best new German band since Edguy?. Moving from the newcomer to the professional league therefore should be bound to happen and in record time at that?