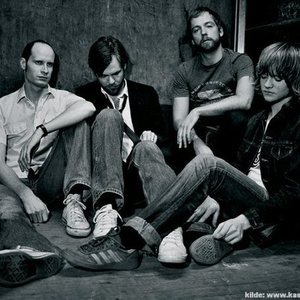 Kashmir are a Danish rock band formed 1991 in Frederiksberg, Denmark. Originally called Nirvana, the band quickly changed its name to Kashmir due to the Seattle based grungeband of the same name, breaking through at the time. The name derived from the Led Zeppelin song Kashmir, since this was the only song all band members could agree upon, since their various musical tastes were diverse. The band consists of the members: Kasper Eistrup (vocals & guitar) Mads Tunebjerg (bass) Asger Techau (drums)

Henrik Lindstrand (keyboards & guitar).
Their earlier albums were musically in the vein of Primus and Red Hot Chilli Peppers, but with their third full length album their style changed dramatically to be influenced by Jeff Buckley and Radiohead, a style often characterised by newcomers as in the same veins as Coldplay, however Kashmir has in Kasper Eistrup, an original text writer and singer, who can hardly be summarized as anything close to Chris Martin.
To this date, the band have released six full length albums. Their latest, Trespassers (2010). With the release of NBP, the band yet again changed direction musically to be inspired by artists such as Sonic Youth and other noise rockers.

It should be noted that there also was a Swiss band with the same name which was active between 1979 and 1982. Consisting of keyboarder Patrice Guenat and singer Henry Dubelly, they produced two albums that range between synthesizer pop and neo-progressive genres.