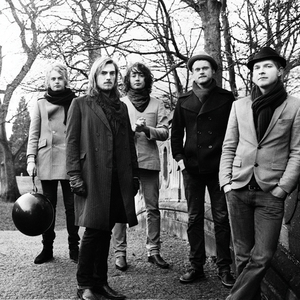 Figurines is a danish indie rock group with main focus on intense and stripped rock songs. Formed in in the small town of Vestbjerg, Northern Jutland, they lived at a distance to an established music scene, the nearest indie rock bands playing in the town of Aalborg. This is possibly the reason why the band sounds more like American lo-fi like Modest Mouse than the rest of the Danish indie rock acts.

Figurines was formed in the mid 90s by Christian Hjelm, Andreas Toft, and Claus Salling Johansen. In 2001 the debut EP "The Detour" was released, and later that year Kristian Volden joined. The EP got them a contract with Morningside Records - a label that has continued to contribute with releasing the work from indie and lo-fi acts from Jutland (West Denmark).

In april 2003 "Shake a Mountain", was released and the single "Bright" got some airplay. The band signed with german label Pop-U-Loud. The same year they played the Roskilde Festival.

In 2005 the longplayer "Skeleton" got them an american deal with The Control Group and a favorable reception in the US.

24th of May bass player Andreas Toft left the band and was replaced by Mads Kj?rgaard..

On their last release "When the Deer wore Blue" the band also included Jens Ramon.

The band was signed in 2007 to Ben Watt's new label Strange Feeling Records in the UK.

In 2010 the band reunited, but with only three of its former members: Christian Hjelm, Jens Ramon & Claus Johansen. In september 2010 they released their latest album "Figurines".

When The Deer Wore Blue